So, you just made a terrible decision. Something so absurd you smack the front of your head in disgust. Well, you actually just smacked the part of your brain that made that decision. The frontal lobe, located in the front part of the brain, is the largest of the four main lobes and is considered our emotional control center and home to our personality and decision-making abilities.

The frontal lobes also are linked to sensory and memory centers throughout the brain and allow us to determine how to use information that is stored elsewhere. To put it simply, it allows us to think things through and rationalize decision making. 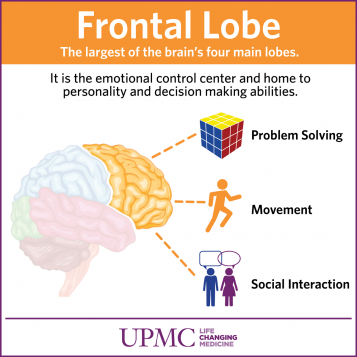 Other important functions of the frontal lobe include:

You feel good knowing that $20 can buy you 10 $2 candy bars. Thank your frontal lobe for knowing simple math. Activity in this lobe allows us to solve problems, reason, make judgments, make plans and choices, take action, and generally control your living environment. Without the frontal lobe, you could be considered a genius, however; you would be unable to use any of that intelligence.

OrthopaedicsWhat to Know About Myelopathy

OrthopaedicsWhat to Know About Myelopathy

The frontal lobe controls your voluntary muscles, or the muscles you use to ride a bike, jog, throw a baseball, or make other conscious movements. Other parts of your brain control involuntary movement and muscle coordination. Also, the ability to determine the position of your body in a natural environment, or spatial orientation, is also a function of the frontal lobe.

The frontal lobe gives us the ability to communicate and interact appropriately in any given situation. This area of the brain also allows us to understand the thinking and experience of others, which helps you determine how to respond or behave when placed in a social situation. For example, was that joke you’re friend told funny? Maybe not and you gave a fake laugh just to make them feel better. You guessed it, frontal lobe at work.

Can you live without your frontal lobe?

Interested in learning more about the fascinating workings of your brain? Visit the UPMC Department of Neurosurgery online to learn more about the latest in the field of brain mapping tests, therapy, and procedures.

The UPMC Department of Neurosurgery is the largest academic neurosurgical provider in the United States. We perform more than 11,000 procedures each year. We treat conditions of the brain, skull base, spine, and nerves, including the most complex disorders. Whether your condition requires surgery or not, we strive to provide the most advanced, complete care possible. Our surgeons are developing new techniques and tools, including minimally invasive treatments. U.S. News & World Report ranks neurology and neurosurgery at UPMC Presbyterian Shadyside as among the best in the country. We also rank among the top neurosurgery departments in the U.S. for National Institutes of Health funding, a benchmark in research excellence.