What’s your favorite scene in Home Alone? The time when Harry and Marv both get shot with Kevin’s BB gun? (Although Marv seemed to get the worst of it.) Or the time when Harry opens the back door, only to smell the sweet scent of his own burning hair and flesh courtesy of a rigged-up blowtorch? Or how about the seemingly harmless (by comparison) crowbar blows Harry takes from a spider-fearing Marv?

While these are truly gut-busting scenes, the reality of them isn’t so pretty. A BB gun shot to the forehead from close range would certainly break the skin and require stitches or sutures. And the blowtorch? Well, this is just bad. For some reason, Harry refuses to remove himself from the flame and takes a direct toasting for nearly seven seconds. What was likely just a relatively simple second degree burn has now turned into a necrosis of the skull bone, meaning Harry’s skin and bone tissue will become so damaged and rotted that it will likely require a transplant. Yes, that’s a replacement of your actual skull bone. Not so great. As far as the crowbar blows, that’s just a few cracked ribs. A relatively minor “real life” injury that Marv and Harry would face trying to nab our favorite childhood star.

Check out the infographic below to learn more about what would actually happen to the Wet Bandits, if this movie had been a little less Hollywood slapstick. 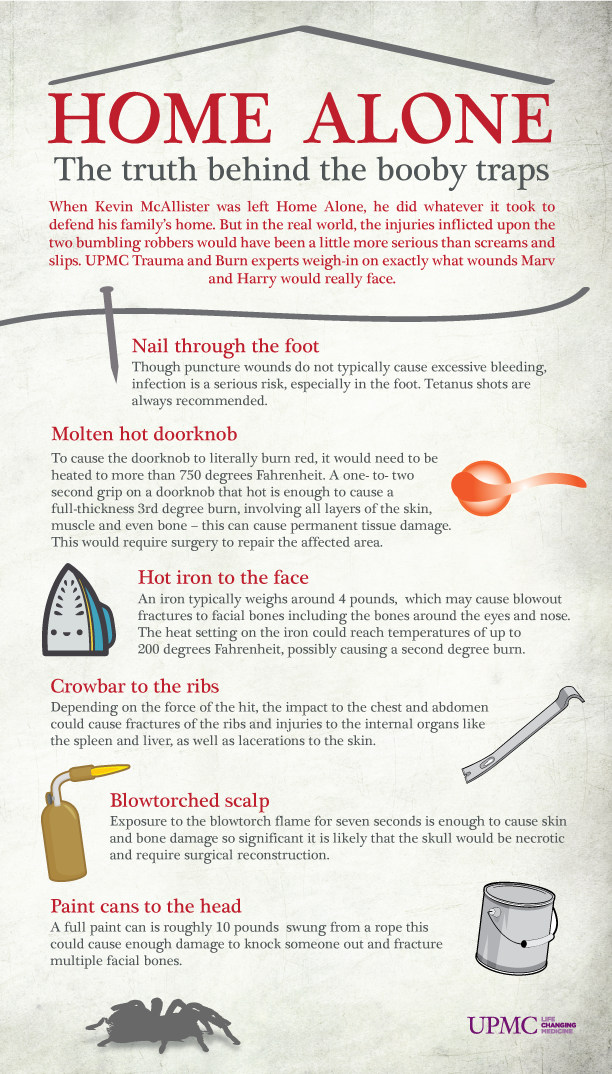 Infographic: The Truth Behind the Home Alone Booby Traps

When Kevin McAllister was left Home Alone, he did whatever it took to defend his family’s home. But in the real world, the injuries inflicted upon the two bumbling robbers would have been a little more serious than screams and slips. UPMC Trauma and Burn experts weigh in on exactly what wounds Marv and Harry would really have faced.

Nail through the foot

Though puncture wounds do not typically cause excessive bleeding, infection is a serious risk, especially in the foot. Tetanus shots are always recommended.

To cause the doorknob to literally burn red, it would need to be heated to more than 750 degrees Fahrenheit. A one-to-two second grip on a doorknob that hot is enough to cause a full-thickness third degree burn, involving all layers of the skin, muscle, and even bone. This can cause permanent tissue damage and would require surgery to repair the affected area.

Hot iron to the face

An iron typically weighs around four pounds, which may cause blowout fractures to facial bones, including the bones around the eyes and nose. The heat setting of the iron could reach temperatures up to 200 degrees Fahrenheit, possibly causing a second degree burn.

Crowbar to the ribs

Depending on the force of the hit, the impact to the chest and abdomen could cause fractures of the ribs and injuries to internal organs like the spleen and liver, as well as lacerations to the skin.

Paint cans to the head

A full paint can is roughly 10 pounds. Swung from a rope, this could cause enough damage to knock someone out and fracture multiple facial bones.

Even though Home Alone is a work of funny fiction on film, those pratfalls would be far less humorous if they happened in real life. Keep in mind, that safety is important during the holidays — whether you’re visiting family or staying with loved ones at home. Take the proper precautions to make sure your friends and family stay safe this season. Have a safe and happy holiday from all of us at UPMC!

SafetyUnsure About Wearing a Facemask? Here’s What You Need to Know

SafetyHow UPMC Is Keeping You Safe

SafetyUnsure About Wearing a Facemask? Here’s What You Need to Know

SafetyHow UPMC Is Keeping You Safe