Sean, a former college hockey player, is used to taking a few hits. In November 2012, during his junior year at Duquesne University, Sean had his first shoulder injury. With a diagnosis of a dislocated shoulder, Sean began attending physical therapy at UPMC Sports Medicine. Sean and his physical therapist worked on strengthening exercises to help him continue playing. 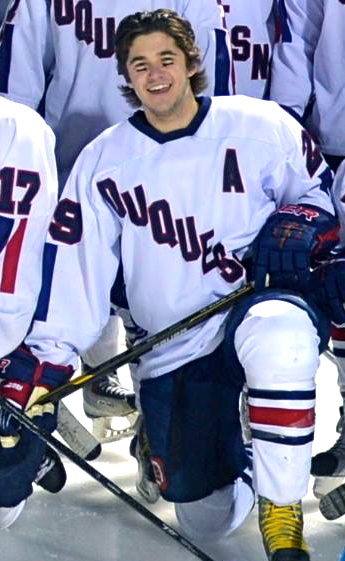 In September 2013 during Sean’s senior year, he took a hard hit during preseason training and again dislocated his shoulder. He returned to UPMC Sports Medicine and saw Dharmesh Vyas, MD, PhD who diagnosed Sean with a near-circumferential shoulder labrum tear. Given the amount of damage in the shoulder, as well as the shoulder instability and pain reported by Sean, Dr. Vyas recommended and performed arthroscopic surgery to repair the labrum.

One week after surgery, Sean began a physical therapy regimen. Sean’s physical therapy appointments, led by Tara Ridge, MS, PT, and Joe Micca, took place one-to-two times a day at first and decreased as he got further into his recovery. His physical therapy, which took approximately four months, focused on restoring the range of motion and strength in his shoulder and returning him to hockey.

Dr. Vyas followed Sean’s recovery and was pleased by Sean’s progress. Dr. Vyas reports, “Sean was an excellent patient. His positive attitude, motivation to get better, and dedication to his rehabilitation serves as a testament of how athletes of all levels can return to their sport with the help of our team at UPMC.”

Today, Sean is back to playing hockey recreationally every chance he gets.

“I had a great experience at UPMC. All of the doctors and the team of physical therapists I worked with really helped me get better in the fastest way possible.”

*Sean’s father is a UPMC employee, working with commercial and cancer services.