Named for Aphrodite, the Greek goddess of love, aphrodisiacs are drugs, food, herbs, beverages, or other substances thought to stimulate a man’s or woman’s sexual desire or performance — a “love potion,” in other words.

When it comes to so-called culinary aphrodisiacs, you might wonder if the way to your lover’s heart is really through his or her stomach. The truth is, if you’re expecting certain foods or beverages to jump start your libido, you’ll likely be disappointed. There’s little scientific basis for aphrodisiac foods.

That said, some foods might evoke a sense of sexual desire in people who consume them. In most cases, that’s due to the placebo response, a psychological effect based on solely on the food’s reputation and your belief in it. Other foods contain nutrients that are associated with a healthy sex life, although it’s unclear if eating them will have any real impact on your libido.

Here, we’ll look at some common culinary aphrodisiacs and their possible actions—just in time for Valentine’s Day. 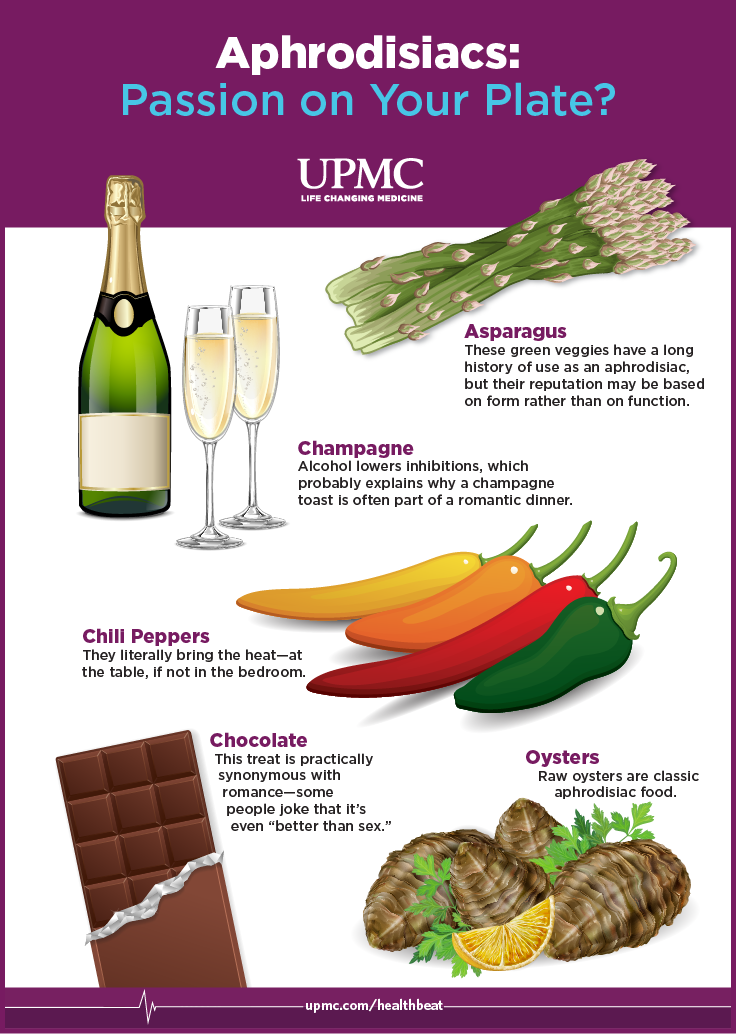 These green veggies have a long history of use as an aphrodisiac, but their reputation may be based on form rather than on function. Specifically, the phallic shape of asparagus spears might trigger subconscious feelings of lust in us. From a more nutritional standpoint, asparagus is rich in potassium, fiber, vitamins A, B6, and C, and folic acid, all of which are crucial for good health—and when you feel good, you’re more likely to feel frisky.

Alcohol lowers inhibitions, which probably explains why a champagne toast or a few glasses of wine are often part of a romantic dinner. Keep in mind, however, that over consumption of alcohol can have the opposite effect, dulling libido.

As with any spicy food, chili peppers can make you feel flushed. They literally bring the heat—at the table, if not in the bedroom. Remember, though, that eating too much spicy food can contribute to heartburn and other digestive discomfort.

This sweet treat is practically synonymous with romance—some people joke that it’s even “better than sex.” There’s a reason why: Chocolate is rich in anandamide and phenylethylamine, feel-good chemicals that trigger the release of dopamine in the brain’s pleasure centers. It also contains tryptophan, a substance that can promote a sense of relaxation. Learn more about the health benefits of chocolate.

Raw oysters are classic aphrodisiac food. Legend has it that renowned lover Casanova used to dine on 50 oysters for breakfast. Although more research is needed, early investigations suggest that the zinc and amino acids they contain might affect levels of sex hormones, at least in lab rats. One caveat: Choose raw oysters from a reliable source. Food poisoning from shellfish is anything but sexy.