“I’ve been running since I was a kid,” Mickey said. “When I was 5, my dad started taking me to the track. As I got older, I ran hundreds of races with my dad because my junior high and high school didn’t have a track or cross-country team.” 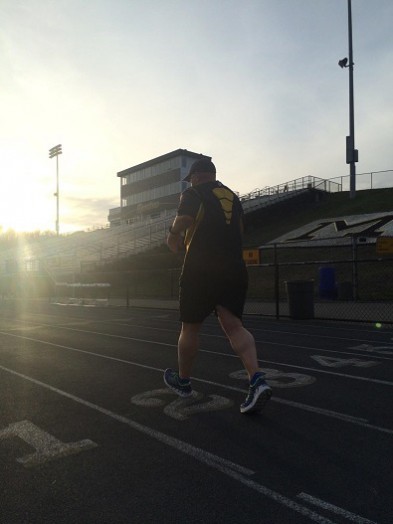 Mickey Marshall says a cross-training program at UPMC helped him improve his performance on race day.

Mickey’s dad eventually had to stop running due to health complications.

“I quit running when my dad quit,” Mickey said. To stay active, he began body building but avoided cardio. He competed twice in Mr. Natural Pittsburgh, but eventually, Mickey stopped working out altogether and gained a significant amount of weight.

At 300 pounds, he realized he had to get back to living a healthy lifestyle. By 2011, Mickey began running again and participated in various marathons and half-marathons.

Mickey’s life changed in June 2014 with the death of his dad. Immediately after, he stopped exercising.

Sports MedicineStretches for Dancers: Why It Matters

Sports MedicineSolo Basketball Workouts You Can Do at Home

Sports MedicineStretches for Dancers: Why It Matters

Sports MedicineSolo Basketball Workouts You Can Do at Home

“After about three months, I realized my dad wouldn’t want me to be living this way and he would want me to be running again, so I kept going and got back at it,” Mickey said.

In October 2014, Mickey finished the Mario Lemieux Foundation 6.6K. He continued running and during a kickoff run for the 2015 DICK’S Sporting Goods Pittsburgh Marathon and UPMC Health Plan Half-Marathon, Mickey heard about the Total Body Cross Training Program for Runners held at the UPMC Rooney Sports Complex. Mickey decided to try it out and added the class to his schedule.

“I climb the steps of the Cathedral of Learning once a week, and I run with the Steel City Road Runners three times a week,” Mickey said. “But the cross training program really helped my core, balance, and strength.”

Since 2011, Mickey’s race times have consistently improved. He lowered his half-marathon time from 3:01 in 2012, to 2:10 in October 2015. Mickey continues to leverage everything he has learned during cross training and includes the workouts into his routine.

He credits the cross-training program, as well as his track workouts, for helping him improve his times. “At certain points during races, and before I took the class, I never felt tired or winded but I didn’t feel strong either,” Mickey said. “Now when I’m running, I feel like a maniac.”

In October, he ran the Mario Lemieux Foundation 6.6K again, but this time, he shaved more than 10 minutes off of his time.

Mickey is currently participating in the cross training program and preparing for the UPMC Health Plan Pittsburgh Half-Marathon on May 1, 2016.

Since 2011, Mickey has lost more than 60 pounds and has ran three full marathons and 10 half-marathons. He is hoping to break two hours during a half-marathon this year. Helping him achieve his goal, Mickey also credits all of the runners at Steel City Road Runners who continue to inspire him.