Judo and taekwondo are two popular forms of martial arts that can benefit both the body and mind. Here’s what to consider about these two martial arts before trying them.

Get Your Kicks with Taekwondo

This sport originated in the 1940s and 50s in Korea, where it grew out of kwans, schools established by Korean martial artists who had studied in Japan. Also called “tae kwon do,” the name of this martial art translates to “the way of the hand and the foot.”

The translation makes sense because taekwondo’s main techniques are kicking maneuvers. Your hands are used primarily for blocking, rather than for striking.

Taekwondo: What to expect

Although every taekwondo school (called a dojang) is different — and there are different sub styles of the sport — you can expect to learn a variety of techniques when you become a student. You’ll likely wear a white uniform with a belt around the waist that signifies your rank. If you’re practicing sparring, you might also wear protective padding. Typical taekwondo techniques include: 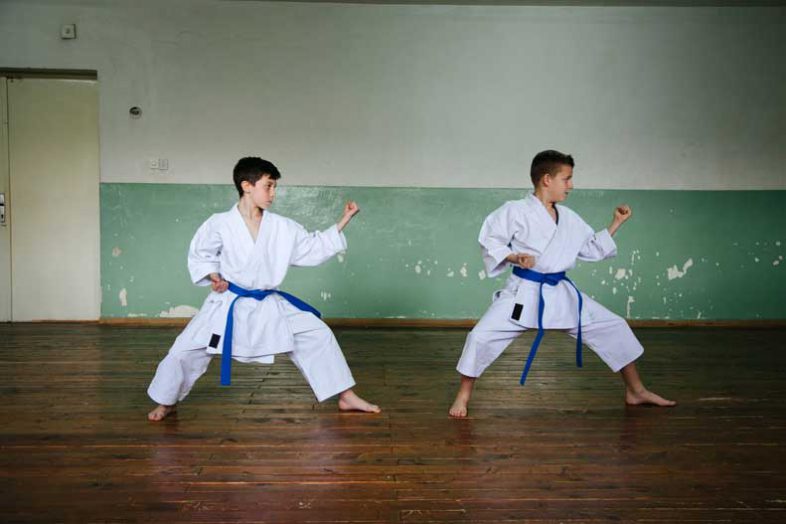 Judo is said to translate to “the gentle way,” possibly because it tends to focus more on defensive maneuvers compared to other martial arts like taekwondo.

Judo is an internationally recognized sport that was established in the 1880s in Japan. It is based on principles such as seiryoku zen’yō (which means maximum efficiency with minimum effort) and jita kyōei (which means mutual welfare and benefit).

Judo: What to expect:

If you are learning judo, you will probably wear a white uniform and belt similar to what you would wear in taekwondo. Judo schools are called dojos and a judo teacher is called a sensei. In general, you may learn techniques such as:

Benefits and Risks of Judo and Taekwondo

Both judo and taekwondo carry health benefits and risks. If you practice these martial arts, you can expect to experience some positive changes to your physical and mental health:

As with any sport, be sure to consult your physician before trying judo and taekwondo.