When it comes to how the human brain functions healthily, there are a lot of unknowns. As a result, it is often difficult to understand disorders that affect the brain — and recognize when one of these disorders impacts you or a loved one.

The terms “memory loss,” “dementia,” and “Alzheimer’s” are often used interchangeably when people describe an elderly person with decreased cognitive ability. But in fact, all three mean something different.

Memory loss is a common part of the aging process and isn’t always a sign of something serious. It is also a symptom of both dementia and Alzheimer’s – which aren’t the same condition, though many people confuse them.

Dementia and Alzheimer’s disease are not a normal part of aging and should be addressed by a physician.

Alzheimer’s vs. Dementia: What’s the Difference?

Dementia isn’t a disease – it’s a broad term that describes a decline in a person’s mental ability to the point that their daily life is negatively affected. Dementia refers to a variety of symptoms related to memory, thinking, and social capabilities.

Alzheimer’s, on the other hand, is a disease that ranks as the most common cause of dementia among older people. While the symptoms of Alzheimer’s and dementia overlap, a person can experience dementia that is not at all related to Alzheimer’s disease.

Dementia is caused by damage to brain cells that interrupts their normal functioning. Dementia is usually progressive, meaning that symptoms are initially mild and worsen over time. Different types of dementia affect different areas of the brain, and therefore, have different symptoms.

As a person’s brain cells are damaged, their mental functions decrease. For a condition to be diagnosed as dementia, at least two of the following functions must be severely impaired:

Doctors diagnose dementia by examining a person’s medical history and asking them and their loved ones about any behavioral/mental abnormalities, testing a person’s mental skills like attention and language, carrying out standard medical tests to rule out other causes, and performing CT, MRI, or PET scans to look for a cause.

Dementia can be caused by Alzheimer’s or another disease, or it can be the result of environmental or lifestyle factors.

What Is Alzheimer’s Disease?

Alzheimer’s is a type of dementia affecting memory, thinking, language, and behavior.

Most affected people are diagnosed after the age of 60, though some may be diagnosed in their 40s or 50s (early-onset Alzheimer’s). Alzheimer’s is the result of the deterioration of brain tissue that interferes with brain cells’ ability to function normally. Over time, connections between brain cells are broken and tissue shrinks to the point that affected individuals usually end up depending entirely on others for daily life.

RELATED: Recognizing the Signs of Alzheimer’s

Neurosurgery and Brain HealthWhat Is the UPMC Comprehensive Epilepsy Center?

Neurosurgery and Brain HealthWhat Is the UPMC Comprehensive Epilepsy Center?

The disease varies for each person affected, but the general stages of its progression are as follows: 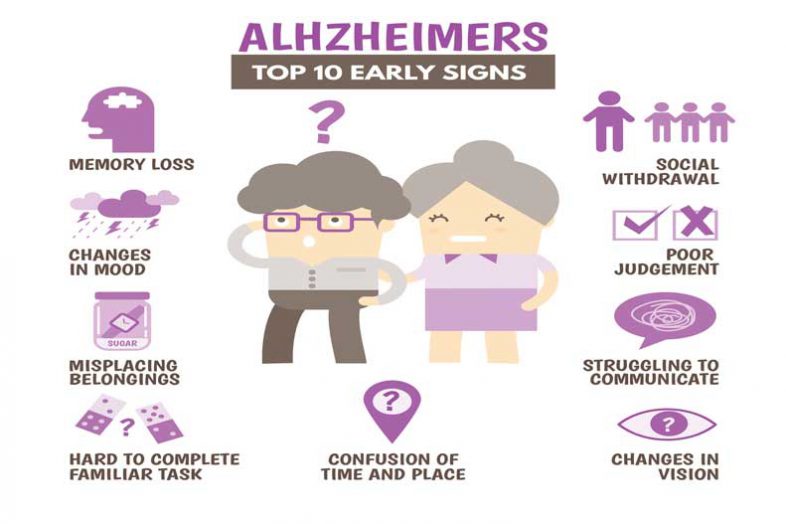 Is There a Cure for Dementia and Alzheimer’s?

There is no cure for either Alzheimer’s disease or dementia.

Depending on the cause of dementia, doctors can prescribe medication to manage or slow down its symptoms. Though individuals can live with dementia for decades, it usually shortens people’s lifespans.

Alzheimer’s is a terminal disease, though researchers are actively looking for a cure. Medications can be prescribed to manage behavioral changes, memory loss, depression, and other symptoms. But there is no way to stop the effects of the disease.

If you think you or a loved one may be affected by dementia or Alzheimer’s, make an appointment with your primary care physician. Visit UPMC’s Aging Institute website for more information on caring for elderly loved ones and recognizing brain disorders. You can also find more information by visiting the website for UPMC Neurology Services.

The UPMC Department of Neurosurgery is the largest academic neurosurgical provider in the United States. We perform more than 11,000 procedures each year. We treat conditions of the brain, skull base, spine, and nerves, including the most complex disorders. Whether your condition requires surgery or not, we strive to provide the most advanced, complete care possible. Our surgeons are developing new techniques and tools, including minimally invasive treatments. U.S. News & World Report ranks neurology and neurosurgery at UPMC Presbyterian Shadyside as among the best in the country. We also rank among the top neurosurgery departments in the U.S. for National Institutes of Health funding, a benchmark in research excellence.