Claysburg resident Kirk Roudabush figures he owes his life to a rogue honeybee and the expert cancer care he received at UPMC Altoona.

In fall 2016, the mason contractor and beekeeping enthusiast was checking on his honeybees when he was inexplicably stung on the mouth. The swelling eased after a few days, but a painless lump soon appeared on his neck. 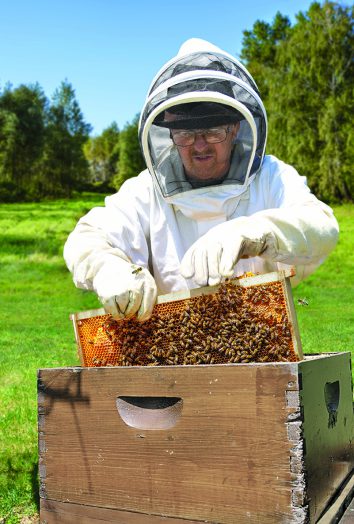 “I ignored it, thinking it was from the bee sting,” says Kirk, 63. At the insistence of his daughter, Danyell Knott, a radiation therapist at UPMC Altoona, he finally agreed to see a doctor. A biopsy confirmed an infection from the bee sting. But it also revealed Kirk had cancer of his left tonsil with the tumor also involving lymph nodes in his neck.

The Coordinated Care at UPMC Altoona

At UPMC Hillman Cancer Center at UPMC Altoona, a team of specialists developed a comprehensive treatment plan for Kirk’s care. In early December, he had surgery to remove his tonsil. Two weeks later, he began seven weeks of radiation and chemotherapy treatments under the care of Jack Schocker, MD, a radiation oncologist, and Hasan Bit-Shawish, MD, a medical oncologist.

“We work together seamlessly to provide sophisticated and comprehensive treatment,” says Dr. Schocker. “Providing chemotherapy and radiation at the same time is effective in head and neck cancers because the chemotherapy drugs help the radiation work better.”

One of Many Reasons to Choose UPMC Altoona

The UPMC Hillman Cancer Center at UPMC Altoona connects local patients to one of the country’s largest integrated cancer care networks and offers a full range of services for cancer prevention, detection, diagnosis, and treatment.

Kirk underwent all of his treatment as an outpatient. Monday through Friday he went to UPMC Altoona for intensity modulated radiation therapy (IMRT).

“It’s an extremely precise method of delivering radiation,” says Dr. Schocker. “It allows us to use higher, more effective doses while sparing healthy tissue and reducing side effects.”

And once a week, Kirk went from radiation to the medical oncology suite for several hours of chemotherapy. “I’m so glad all of my appointments and treatments were right in Altoona. Driving to Pittsburgh would have been a big problem for me,” he says.

Kirk’s treatments ended in March 2017, and the feeding tube that sustained him throughout his therapy was removed in July. Today, he has no evidence of cancer.

“That bee sting saved my life. Cancer was heading to my heart and lungs, and I never would have known had it not happened,” says Kirk. “I’m so thankful to be alive, and I’m grateful for the care I received at UPMC Altoona. I had the best doctors I could ask for.”

Why Choose UPMC Altoona for Your Cancer Care?

UPMC Hillman Cancer Center at UPMC Altoona offers the most up-to-date services available to prevent, detect, diagnose, and treat all types of cancer, including: