Amy Bonner’s blood clot seemed to come out of nowhere. An innovative procedure saved her from a life of pain—or worse.

Amy Bonner is a vibrant, active advertising executive who loves to perform in community theater. She had no idea she was born with May-Thurner Syndrome, a rare condition of the lower vascular system until, at age 36, it caused a life-threatening blood clot in her left leg. “I was just feeling lousy one night, right after dinner,” she says. “I decided to head upstairs and lie down. As I climbed the stairs, I noticed that my leg felt heavy, like it was asleep. I looked down at my leg, and it was purple.”

Learn more about the conditions treated at the UPMC Heart and Vascular Institute.

Pittsburgh’s streets were glazed by an ice storm that evening and driving to the local ER was risky. So
Amy called her health insurer’s Nurse On Call service and described her symptoms. “She said to me, ‘Honey, you should get to a hospital right now,’” Amy says. “I was already listening to my own inner voice that told me this was more than a tired leg. It was that ‘honey’ that convinced me this was serious. That’s when we got in the car.”

May-Thurner Syndrome (MTS) is a kink in the plumbing caused when the left iliac vein, a large vein that moves blood from the left leg up toward the heart, is compressed by the overlying right iliac artery. Most people with this condition live a long life, never knowing they have it. It can cause discomfort, swelling, and pain that is never diagnosed.

Or, as in Amy’s cause, the bottlenecked vein can generate a serious blood clot called a deep vein thrombosis (DVT). DVT can mean more than a life of leg pain. If the clot breaks up and moves to the heart, lung or brain, DVT can quickly become a life-threatening event. 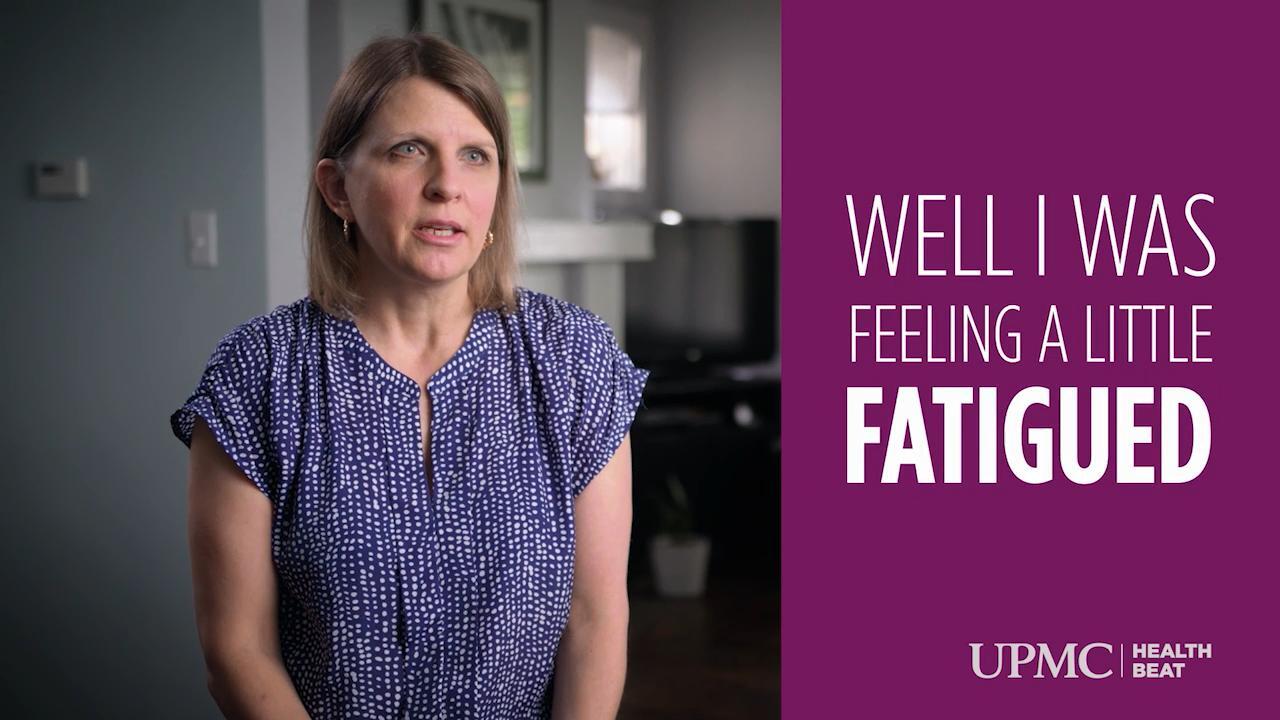 At the ER, an ultrasound revealed a six-inch clot in Amy’s left iliac vein, and she was transferred to UPMC Presbyterian Hospital, home of UPMC’s nationally recognized Heart and Vascular Institute (HVI).

The HVI is where UPMC brings cardiologists, cardiac surgeons, and vascular surgeons together for collaborative research and clinical care that benefits heart and transplant patients as well as vascular patients like Amy. Having access to the HVI’s multidisciplinary team of pulmonary specialists, interventional cardiologists, and cardiac and vascular surgeons helped ensure that the risk of DVT complications — such as pulmonary embolism — could be managed.

Amy’s case was referred to Rabih Chaer, MD, chief of vascular surgery at UPMC Presbyterian. “May- Thurner Syndrome is not very common, though awareness is increasing,” says Dr. Chaer. “In western Pennsylvania, we’ve seen maybe 50 cases over the last 10 years.” This number of cases includes Amy’s, which Dr. Chaer described as “end stage.”

“A clot like this typically appears when you’re older, unless you have a condition like MTS,” says Dr. Chaer. Standard treatment in an older patient would be a blood thinner, which would enable the patient to live with the clot and avoid an intervention.

The Goal: Quality of Life

“But Amy is young,” says Dr. Chaer. “The goal of care for her was to improve her quality of life.” That meant a more innovative minimally invasive procedure: dissolving and removing the clot with drugs delivered through a catheter, followed by the placement of a stent to strengthen the vein and prevent further clotting.

The stent, typically used for arterial applications, hadn’t been used widely for veins at the time of Amy’s procedure, and it has proven to be effective. “It has lasted 10 years, with no complications,” says Dr. Chaer.

“The stent placement procedure was certainly far less invasive than surgery.” Today, symptom-free and still active in local theater, Amy comes back to UPMC to see Dr. Chaer every year for a checkup and to stay current on developments in MTS.

UPMC is also staying current — with clinical trials for venous application of two new types of stents. “One of our missions,” says Dr. Chaer, “is to be on the leading edge of modern, technology-driven vascular care.”

That mission will be facilitated by UPMC’s $2 billion investment in three new Pittsburgh hospitals to be completed in 2020, including an all-new Heart and Transplant Hospital that will further explore advances in molecular technology, imaging, and predictive modeling that translate into more personalized care for patients suffering from cardiovascular disease.