A pioneering UPMC protocol preserves fertility in children and others affected by chemotherapy.

For about 30 percent of Americans who face cancer each year, the diagnosis brings a double dose of bad news: the threat of the disease itself and the added threat of infertility caused by chemotherapy and radiation. Adults who still want to have children can freeze their eggs or sperm before starting cancer treatment. But for children whose reproductive systems are still developing, it’s more complicated: there are no mature eggs or sperm, and no immediate way of producing them. 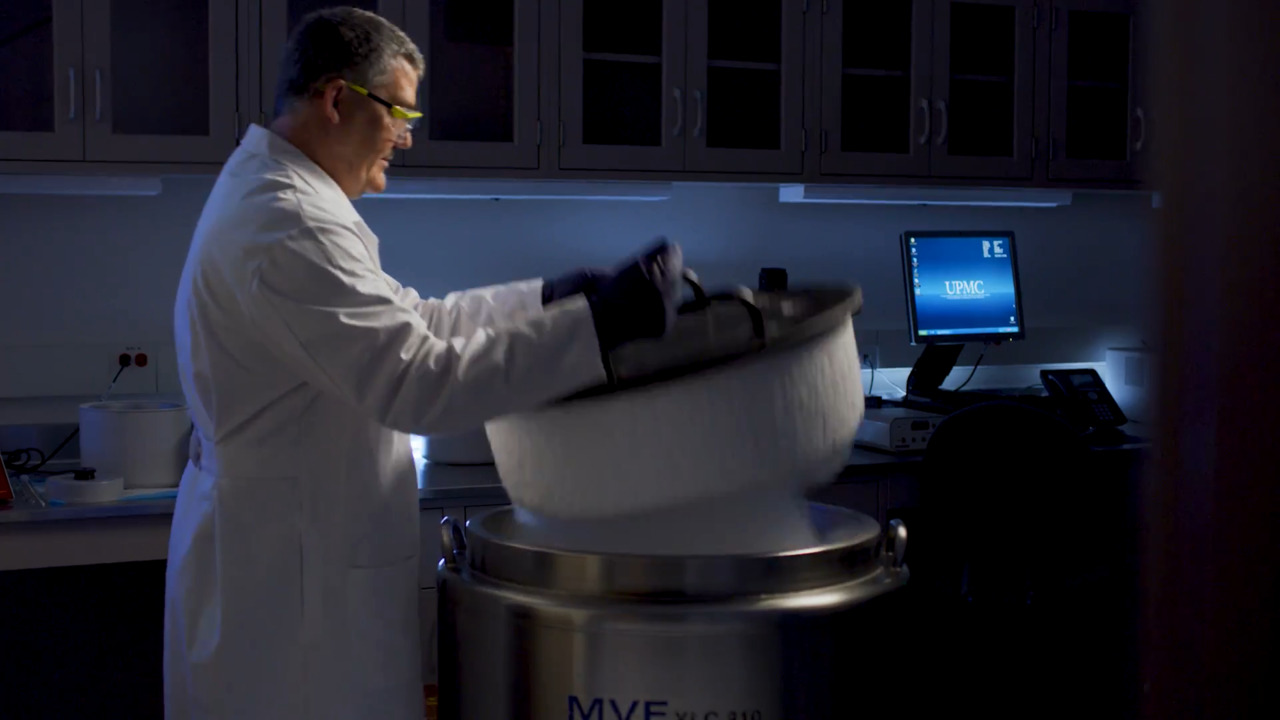 Now there’s new hope for children faced with this dilemma: A promising new tissue protocol developed at UPMC’s Fertility Preservation Program is blazing a path for pediatric patients and others by giving them the chance to make future decisions about having children — long after their cancer treatment ends.

Developed by Kyle Orwig, MD, director of the Fertility Preservation Program at UPMC, the protocol harvests immature testicular tissue in boys and immature ovarian tissue in girls. The tissue is then frozen, or cryopreserved, and re-implanted at a later time.
Dr. Orwig, a stem cell specialist, demonstrated the protocol’s efficacy in animal models by successfully removing and cryopreserving testicular tissues or testicular stem cells from male monkeys before chemotherapy, then later re-implanting the previously frozen tissue. In his studies, the stem cells restored sperm production and the monkeys were able to reproduce successfully.

Following the success of Dr. Orwig’s research, the protocol to freeze testicular tissues and ovarian tissues was approved for use in younger human patients of both sexes. Since its approval and first application in 2011, the protocol has been used on over 200 children at UPMC who had no other options to preserve their future fertility.

The treatment method also was used to treat adult women. Previously frozen ovarian tissues were transplanted back into patients, where they have ovulated, with or without the presence of ovaries. More than 160 births have occurred this way, mostly through normal uterine pregnancies.

With male transplants, testicular stem cell grafts have produced normal sperm, and can produce a baby through in-vitro fertilization. Dr. Orwig hopes that by transplanting stem cells into the testes, the technology could one day lead to restoring normal sperm production and normal male reproduction.

Dr. Orwig sees promise for this protocol beyond patients facing cancer therapy. Bone marrow transplants and individuals with sickle cell anemia or thalassemia all require treatments that affect fertility. Dr. Orwig estimates that 4,000 patients a year could benefit from this innovative form of fertility preservation.

In addition, he says, it could present a fertility option for transgender children. “Families come to us and say, ‘We have a child who is ready to start hormonal treatments. Could you save the tissue for our child before starting treatments?’ After careful consideration, we concluded that the psychological risk of delaying or interrupting transgender treatments is greater than the surgical risk associated with testicular tissue and ovarian tissue freezing.

Connect with us directly at UPMCNext@UPMC.edu.

The protocol is currently available to patients at UPMC in Pittsburgh and eight other sites in the United States, plus two sites in the Middle East. Local hospitals perform the surgeries, then express ship the tissues to UPMC for processing and cryogenic preservation. “The resources of UPMC make this program possible,” says Dr. Orwig. “Our comprehensive integrated fertility preservation program supports the needs of adult men and women, as well as young boys and girls. Few centers anywhere in the world have such a range of options for patients of all ages.”

Looking Past the Diagnosis

As a medical researcher who works closely with UPMC Children’s Hospital of Pittsburgh, where hundreds of children are treated for cancer every year, Dr. Orwig sees the potential of fertility preservation as a vital tool in long-term wellness. “Many of the families that we see have just received a devastating diagnosis of cancer; they feel overwhelmed and out of control. It is rewarding to us — and I think comforting to patients and their families — to be able to help them take control of the fertility aspect of their diagnosis and begin planning for a healthy and productive life.”