With blood loss, time is of the essence. If we train people to administer CPR and the Heimlich maneuver, it stands to reason that we’d also prepare people to respond to blood loss in emergency situations. That’s the goal of Stop the Bleed, an initiative launched by the U.S. Department of Homeland Security in 2015 in the wake of increased gun violence and mass casualties across the country.

“We want to make bleed-control training as common as CPR training,” says David Bertoty, clinical director of Emergency and Trauma Services at UPMC Presbyterian and coordinator for UPMC’s Stop the Bleed efforts. “Massive blood loss is the leading cause of preventable deaths in trauma situations.”

UPMC Leading the Charge to Stop the Bleed

UPMC has been leading regional Stop the Bleed efforts through the Copeland Regional Trauma Council (CRTC), a consortium of trauma centers in Pennsylvania, Ohio, and West Virginia. When Stop the Bleed was launched locally in mid-2016, UPMC committed $1.3 million over three years with the goal of reaching 72 counties in four states, an area encompassing 30,000 square miles.

Learning how to Stop the Bleed 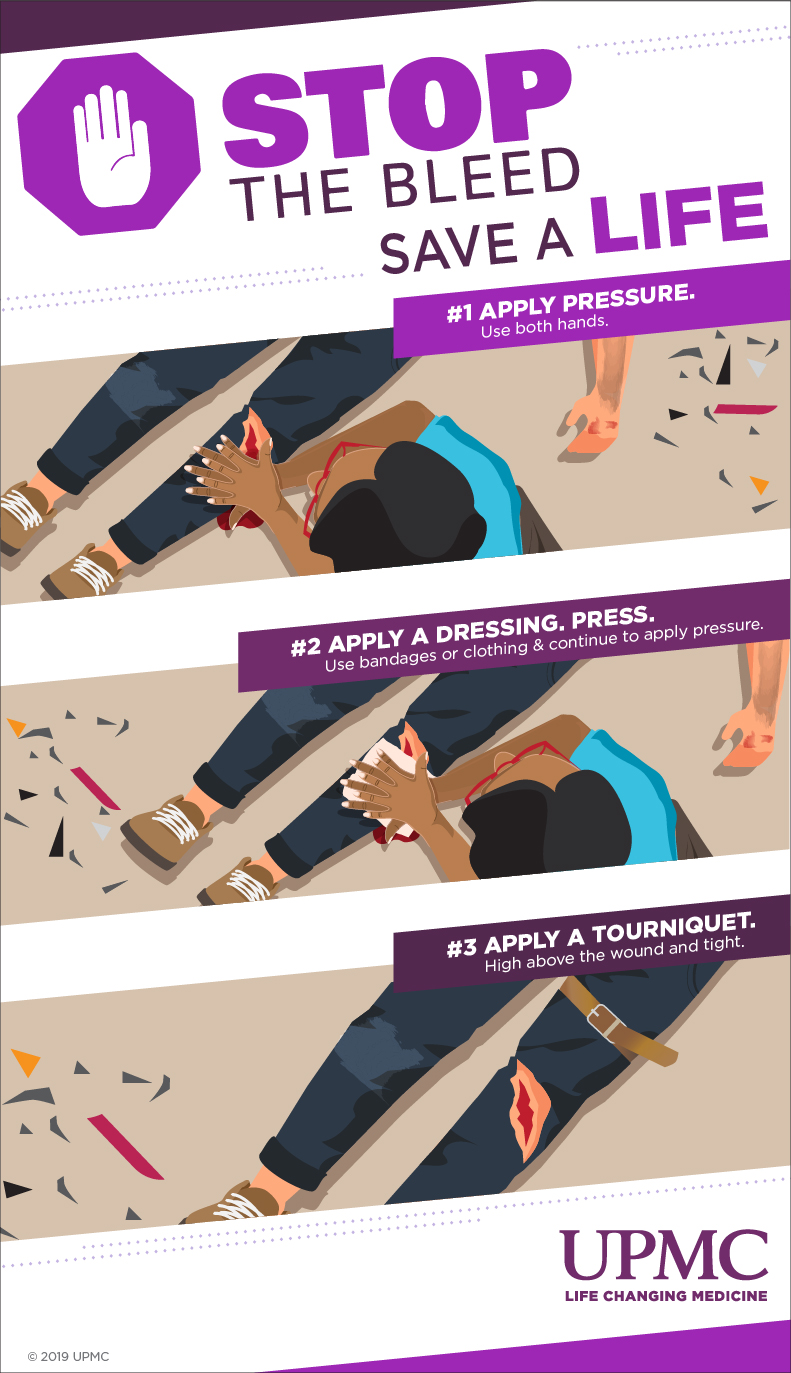 Living and WellnessWhat Pennsylvanians Can Do to Combat the Opioid Epidemic

SafetyWhy You Should Protect Your Hearing

Living and WellnessWhat Pennsylvanians Can Do to Combat the Opioid Epidemic

SafetyWhy You Should Protect Your Hearing

Training Can Save Lives

With the right training and education, anyone can react quickly during a traumatic situation to help save a life. Free training is provided to school districts, churches, scout troops, gun clubs, and the general public – any group or individual that wants to be empowered to respond to blood loss.

“You are much more likely to encounter the need to control bleeding than to assist someone who has cardiac arrest and needs CPR,” says Bertoty. “There are countless accidents that can cause uncontrolled bleeding. Unfortunately, mass shootings are on the top of everyone’s minds these days. We do have to be prepared for the realities of 21st century America.”

Kits to Stop the Bleed

In addition to providing first aid training to help victims of severe blood loss, the regional Stop the Bleed initiative is focused on placing bleeding control kits in every public school building in western Pennsylvania, and a tourniquet on the belt of every state trooper and law enforcement officer in the region.

UPMC also is providing kits to make them readily available in public spaces, similar to the effort that was made for automatic external defibrillators (AEDs), which are used during cardiac events. The bleeding control kits contain special blood clotting gel, gauze, and tourniquets. They can be used to slow bleeding in the extremities, groin, neck, or armpit until paramedics arrive on the scene.

“We’ve had an overwhelmingly positive response to the kits and the training,” says Bertoty. “These supplies and techniques are essentially basic first aid that would be applicable for accidents that might occur working in a home shop, in the backyard, or in your own kitchen. They can be lifesaving under any number of circumstances.”

Based in Pittsburgh, UPMC is a world-renowned health care provider and insurer. We operate 40 hospitals and more than 700 doctor’s offices and outpatient centers. Our expert physicians are among the leaders in their fields, and we are leaders in groundbreaking research and treatment breakthroughs. UPMC Presbyterian Shadyside ranks as “One of America’s Best Hospitals” and No. 1 in Pennsylvania in U.S. News & World Report’s listings.