“He literally took out a pen, drew a diagram on the exam table paper, and said, ‘This is, generically, how it needs to be done.’ I remember looking at that and thinking, ‘I’m in the right place and with the right person. I’m in good hands.’” —David

A Personal and Professional Passion

For as long as he can remember, David has been heavily involved in the sports world.

Nearly 25 years ago, he made his personal passion for sports a professional one by securing a job at a well-known racquet sports company. Today, he is an international businessman at that same company, spreading his passion for pickleball, one of the fastest-growing sports in America, worldwide. 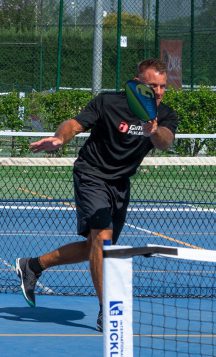 “Being in this business means that I have to be a participant,” David says. “My job requires me to play sports, in addition to representing the company.”

Unfortunately, the heavily active lifestyle so important to David took a toll on his shoulders and resulted in one of the most common injuries in players of racquet sports. He pushed the rotator cuffs in both of his shoulders to a point of immense pain and weakness. His right shoulder was so painful that, at one point, he couldn’t even hold up the equivalent of a coffee cup in his hand.

“From constant and regular weight resistance training, I had worn my shoulders down,” David says. “By the time I had reached this point, I had already gone way too far.”

It became clear it was time to do something about it.

The Search for Shoulder Experts

Having decided to get his shoulders medically evaluated, David visited and received a diagnosis from professionals at another health system. He was determined to get his lifestyle back and was willing to travel anywhere to seek treatment.

This determination led him to search the internet for sports medicine shoulder experts, which, in turn, led him to UPMC Sports Medicine and orthopaedic surgeon Albert Lin, MD. 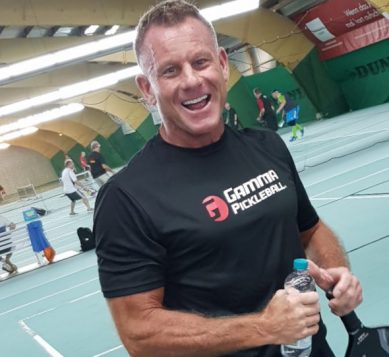 David described his first appointment with Dr. Lin and a moment that he will never forget: “He literally took out a pen, drew a diagram on the exam table paper, and said, ‘This is, generically, how it needs to be done.’ I remember looking at that and thinking, ‘I’m in the right place and with the right person. I’m in good hands.’”

Known for explaining his diagnoses and surgical plans in creative ways to increase patient understanding and comfortability, Dr. Lin did nothing less for David.

“It was something very archaic, with all of this technology, but that is how he needed to communicate it to me,” David said.

Dr. Lin recognized the extent of the damage in both of David’s shoulders and, over the next few years, performed two surgeries to repair them — one on each shoulder.

In 2013, Dr. Lin performed an arthroscopic rotator cuff repair on David’s right shoulder, the more severe of the two. A year later, he performed the same surgery on his left shoulder, which was less severe but still seriously damaged.

A third surgery repaired a torn tendon at the elbow. After two arthroscopic rotator cuff repairs and recoveries, Dr. Lin performed a distal biceps tendon repair at the elbow to fully restore the function of David’s arm.

David says Dr. Lin thoroughly prepared him for what was to come.

After his first surgery, David was eager to complete the post-op period, typically three to six months long, as quickly as possible.

“In the back of my mind, I thought, ‘I’ll reduce the time by half.’ That was just my ego talking,” David says.

In the end, he followed the post-op rehabilitation plan very closely with the encouragement of Dr. Lin and the persistence of his physical therapist.

At the UPMC Centers for Rehab Services: Monroeville – Corporate One, Tom O’Malley, PT, MS, helped David make a full recovery by developing a personalized rehabilitation plan and safely returned him to his active lifestyle.

“To this day, I am so thankful for following the plan as it was outlined, because I believe that that was the key.” David says. “Beyond the surgical procedure, I think that following the post-op plan was the biggest part of my success with both operations.”

‘The Forrest Gump of Woodland Hills’

After his surgeries, David’s mental rehabilitation became just as important as the physical. To avoid becoming lazy as he recovered, David walked the roads of the Woodland Hills area twice a day.

“During this rehab time, it was very common to see me out there,” David says. “My arm was in a sling with a pillow, so even if you didn’t know who I was, people would be going by just beeping the horn. A lot of people who didn’t know me came to know me just from seeing me on this regular walking routine for months. The community quickly came to know me as the ‘Forrest Gump of Woodland Hills.’”

Having gone through three surgeries in about three years with Dr. Lin, David had nothing but great things to say about his experience. From providing David with his cell phone number, to truly exemplifying the patient-provider relationship, Dr. Lin made David feel at ease from day one; David says he’d recommend him to “anyone and everyone.”

When asked what advice he’d give to others suffering from rotator cuff pain, David stressed the importance of trusting the doctor and physical therapist in following the rehabilitation plan.

He remains in touch with Dr. Lin and says he can’t remember his right shoulder ever feeling better than it has been since that first surgery.

“My shoulders are beyond 100 percent compared to the way they were,” he said.