“At that point, my shoulder felt even better than before I injured it. I don’t think I realized how bad it was­ — and how bad it was getting — over those 25 years”  – Kara 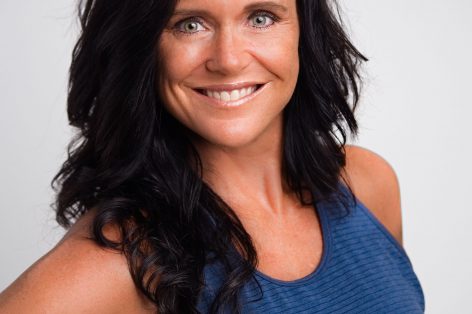 Kara was a collegiate swimmer until tendonitis in her right shoulder became so painful it ended her swimming career. After she stopped swimming, Kara’s shoulder pain subsided and she was able to manage her condition.

Nearly 25 years later, Kara is married with three children and owns a dance/fitness studio and swimming school in Donegal, Pennsylvania. Besides spending time with her family, she helps children and adults stay active and healthy as a fitness instructor and swim coach. That active lifestyle led to a return of her shoulder pain in early 2018.

“It wasn’t sudden,” says Kara. “I would be in the gym and with each exercise, it hurt a little bit more. Then one day, I couldn’t even raise my arm above my head.”

Searching for a Surgeon

Kara thought that resting her shoulder would again relieve the pain. However, it quickly became clear that she needed to seek medical attention. When a friend suggested that she see Albert Lin, MD at UPMC Sports Medicine, she made an appointment and saw him less than two weeks later.

After a thorough examination of Kara’s shoulder, including an MRI, Dr. Lin diagnosed a complete labral tear. He compared her labrum to a “rope that continued to fray, until it tore from the bone.” He also found calcium deposits within her rotator cuff tendons and noticed degenerative problems in her shoulder. Given Kara’s active lifestyle, Dr. Lin recommended surgery to repair the tear.

“Dr. Lin really takes time to find out your background and why you want the surgery,” says Kara. He reviewed the test results with Kara, explained what he saw in her shoulder, and discussed his plan for minimizing interference with her work with clients.

“Dr. Lin was really good about understanding the importance of timing the surgery so I could work it around my business schedule,” Kara said. The surgery took place exactly six weeks before the start of her summer swimming school, ensuring that although she couldn’t use her arm, she could get into the water to teach.

Dr. Lin performed Kara’s surgery — an arthroscopic posterior labral repair and superior labrum anterior and posterior repair, as well as a subacromial decompression and breaking up calcifications in her shoulder joint — at UPMC East in Monroeville, Pennsylvania. “It was a very positive experience because I got better almost daily,” she says.

Kara’s right arm remained in a sling with little to no movement for four weeks after surgery. She then began a months-long physical therapy regimen. “Being that this is my field, I was able to do the exercises outside of physical therapy too,” says Kara. She says that dedication to her therapy program was key to her recovery. Her advice for someone going through the same thing: “Do your PT, and keep at it! It’s not comfortable to begin with — and it actually hurts — but that’s where the recovery happens.”

Five months after surgery, Kara’s shoulder felt even better than before she injured it. “I don’t think I realized how bad it was — and how bad it was getting — over those 25 years,” she says. “I now have a fully functioning shoulder; I can do everything, and it feels so much better.”

No more than a year after the surgery, Kara remains extremely satisfied with the results of her experience with Dr. Lin. All of her strength and flexibility has returned, her shoulder is functioning at 100 percent, and she is free of pain.

Kara says that finding the right surgeon is important. That’s why she has referred her brother, nephew, and a close friend to Dr. Lin to treat their shoulder injuries “He is great surgeon and a wonderful person in general,” says Kara. “I can’t say enough good things about him.”