Dealing with a chronic Achilles tendon injury, South African Olympian and world-class runner Tanith Maxwell was struggling to properly train and compete. Hoping to find relief, Tanith tried various treatment methods to help relieve the pain. “I tried it all,” said Tanith. “It was to the point that my training could not progress. There was no improvement in sight.”

Tanith recalls dealing with pain from the injury for quite some time. She attempted physical therapy, including shock wave therapy and periods of rest and ice; however, she was never pain-free for very long. She was worried that her career was nearing an end. “I was very frustrated,” she said.

Tanith’s coach, sports scientist Andrew Bosch, hoped to help Tanith find treatment for her injury. He remembered a presentation from the 2017 American College of Sports Medicine (ACSM) annual meeting in Denver. “I went back to my notes from the meeting and found references to a presentation on tendon scraping,” said Andrew. The presentation was delivered by Kentaro Onishi, DO.

The Path to UPMC 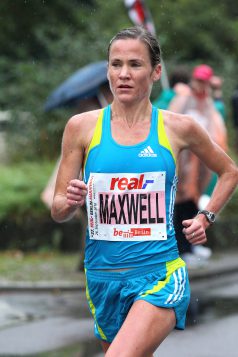 After doing more research into the UPMC Department of Physical Medicine and Rehabilitation, and UPMC Sports Medicine, Andrew sent Dr. Onishi an email explaining Tanith’s background and condition. Since Andrew and Tanith are based in South Africa, Dr. Onishi arranged for an initial Skype meeting. During this time, they discussed Tanith’s symptoms in detail but couldn’t determine if she was a candidate for the procedure.

Dr. Onishi prescribed the appropriate imaging that Tanith would need to obtain before he could make a proper diagnosis. After reviewing her scans, Dr. Onishi was confident he’d be able to treat her injury in Pittsburgh.

“I received the reports from Tanith, and we discussed her injury,” said Dr. Onishi. “Together we decided that her coming to the U.S. was the best option.” Once Tanith arrived in Pittsburgh, Dr. Onishi examined her Achilles tendon. “Her injury was more challenging than I hoped for,” explained Dr. Onishi.

Dr. Onishi performed a procedure known as “mechanical tendon scraping” on Tanith. The procedure took about five minutes and was done with local anesthetics. Unlike most other procedures that require a period of limited weight-bearing, there was no weight bearing or activity restriction following this procedure.

“I felt immediate relief,” said Tanith. “I went on a run with Dr. Onishi six-hours following the procedure. It was amazing. I had no pain.”

Orthopaedics‘Stronger Than I Was Before:’ Erin’s Comeback After ACL, MCL, and Meniscus Injury

Orthopaedics‘Stronger Than I Was Before:’ Erin’s Comeback After ACL, MCL, and Meniscus Injury

Tanith could return to training immediately following her procedure. “My training has progressed,” she said. “It’s no longer stop, start, like it had been when I had pain in my Achilles.”

According to her coach, Tanith feels like she did before her injury. “This has been career-changing for her.”

Now, seven months after the procedure, Tanith has just returned from the World 50km Championships in Romania, where she competed as part of the South African National Team.