When Matthew Klinge, MD, completed his fellowship training in gastroenterology and transplant hepatology, his goal was to bring more advanced services for patients with liver disease to his hometown of Erie, Pa. Now, as a gastroenterologist and transplant hepatologist with Bayfront Digestive Disease, a part of the UPMC Hamot Center for Digestive Health, he’s able to see that goal become a reality.

“I want to serve the community where I grew up,” Dr. Klinge says. “Patients who need special care for liver conditions should not have to travel to see a specialist.”

Dr. Klinge currently is the only doctor in the Erie region with specialized training in transplant hepatology, a discipline that focuses on advanced liver disease and evaluating liver transplant patients before and after surgery. While he provides general gastrointestinal services, including upper endoscopies and colonoscopies, Dr. Klinge’s concentration is liver disease. 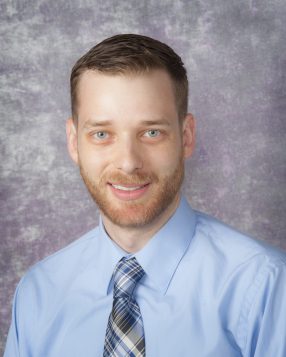 A significant patient population needs treatment for liver disease, Dr. Klinge says, and the numbers are projected to increase in the future. This drives his desire to raise awareness of liver disease in the community. One of the most common and rapidly growing causes for liver transplant is fatty liver disease, which can be improved through lifestyle changes and losing weight. If the disease is caught before it causes significant scarring, or cirrhosis, a patient may be able to avoid needing a liver transplant.

“If I can help a patient prevent having a liver transplant, that’s a win.” Dr. Klinge says.

Another win for the medical community, according to Dr. Klinge, is a cure for hepatitis C, a disease which can lead to liver cancer if not treated. “It’s one of the biggest advancements in medicine in the last

50 years,” he says. “Previous treatments took six months to a year and had only about a 40 percent cure rate. Now there is a pill that is taken once a day for two months, and it has a 98 percent cure rate. It’s really been revolutionary.”

Other chronic liver conditions that he manages include autoimmune liver disease and other forms of viral hepatitis, including hepatitis A and hepatitis B.

TransplantAlcohol and Your Liver: How Drinking Affects Liver Function

TransplantCan You Live Without Your Liver?

TransplantCirrhosis and Liver Transplant: What You Should Know

TransplantAlcohol and Your Liver: How Drinking Affects Liver Function

TransplantCan You Live Without Your Liver?

TransplantCirrhosis and Liver Transplant: What You Should Know

When he began medical school, Dr. Klinge was interested in surgery. A random rotation assignment led him to working with liver disease patients, which eventually became his specialty.

“As a third-year medical student, I decided this is what I wanted to do,” Dr. Klinge says.

After earning his medical degree from Jefferson Medical College in Philadelphia, Dr. Klinge completed an internal medicine residency at UPMC in Pittsburgh. He stayed at UPMC for an additional three years to complete a combined gastroenterology and hepatology fellowship. The last year of the fellowship was dedicated to transplant hepatology.

To schedule an appointment with Dr. Klinge, call Bayfront Digestive Disease at 814-877-7733. For more information about the experts who provide treatment for digestive disorders at UPMC Hamot, visit UPMCHamot.com/DigestiveHealth

About Center for Liver Diseases

The UPMC Center for Liver Diseases provides complete care for a variety of liver diseases. Our expert hepatologists manage and treat patients using cutting-edge practices and therapies. We research and evaluate new treatments to provide the best care possible. work out of several outpatient locations in western Pennsylvania and a specialty inpatient unit at UPMC Montefiore in Oakland. We manage your care and, if necessary, can help you make the transition to subspecialists, including transplant surgery and oncology.