“I definitely saw improvements every single week. I’m just so grateful that they were able to help me get back to doing my own thing at the gym.” – Megan

More than a decade after undergoing surgeries to repair bilateral anterior cruciate ligament (ACL) and meniscal tears in her right knee, Megan noticed that the knee just wasn’t as strong as it was the first few years after the operations. Megan considers herself “your general, average Jane” who works out in the gym and runs an occasional 5k race, but she also is a physician assistant for UPMC Orthopaedic Care. In summer 2018 when occasional jogs in the park led to fatigue, instability, and pain in her knee, she knew something wasn’t right.

“It affected me more as time went on,” say Megan. “It got to the point where I was walking down the stairs and almost falling every time.” Because of her work in health care, Megan knew Volker Musahl, MD at UPMC Sports Medicine was the right doctor to assess her problem. Dr. Musahl examined Megan’s knees and ordered an MRI. The results of the MRI confirmed his diagnosis: Megan’s ACL graft had failed and she needed surgery to regain full function of her knee.

Megan decided to have the surgery, but she was concerned about timing. “We were going on a long-overdue honeymoon to Ireland for two weeks, so I stressed to Dr. Musahl how important it was for me to hike and be really active on that trip,” says Megan. In April 2019 — five months before her honeymoon — Dr. Musahl performed outpatient ACL reconstruction surgery on Megan’s knee and she went home on crutches the same day. “I had wonderful pain management,” says Megan. “I felt like the staff members were extremely skilled and polite. Everybody made my comfort their goal.” 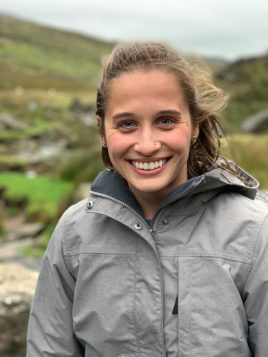 Although she was still regaining strength, Megan had recovered enough range of motion by September 2019  that she was able to hike with minimal assistance on her honeymoon.

During the three-month physical therapy phase of her recovery, Megan had regular appointments with two physical therapists at the UPMC Freddie Fu Sports Medicine Center. “Both physical therapists were absolutely fantastic,” she says. “They each had different skills and expertise to bring to the table.” To improve her range of motion and strength, she did single-leg squats, step-ups, and bicycle exercises to name a few. “I definitely saw improvements every single week, and I’m just so grateful that they were able to help me get back to doing my own thing at the gym,” adds Megan.

The physical therapists also helped her develop a home therapy program. She was able to track her gym workouts on the UPMC Centers for Rehab Services app. The app allowed Megan to see her progress while her physical therapists kept track of the exercises she was doing and how often she did them. Megan says the app was extremely helpful. “In a way, it was like having an accountability buddy.”

When asked what advice she’d give someone in a similar position, Megan stressed that recovery is not always a straight line. Having experienced a few setbacks herself, Megan wants others to keep in mind that they can happen to anyone — even health care professionals. “It was completely different being on the patient side because it reminded me how humbling it can be,” explains Megan. “Despite the fact that I have knowledge about this process, I’m no different than anyone else. I experienced the same emotions, I got frustrated, and I had setbacks. Going through recovery is a process … and you have to keep chugging along. My knee is certainly in much better shape now.”