“Right from the beginning, it was clear that Ron had a fundamental understanding of the movements I needed to perform for my sport.” –Brandi

Brandi may consider herself an “accidental” Olympic weightlifter because of the way she discovered her sport but, when it comes to her level of competition, it is anything but accidental. At 37, she is well on her way to achieving her newest goal– a 400-pound squat. Brandi only started competing in February 2018 and became the first legally blind lifter to make the podium at a national USAW meet in August of the same year.

For those who are unfamiliar with the sport, Olympic weightlifting is an event in which an athlete attempts a maximum-weight single lift of a barbell loaded with weight plates. Competition lifts include the snatch and the clean and jerk. A writer and marketing manager, Brandi describes herself as a very “cerebral” person, so she needed a physical outlet. Cross-training became that outlet for her, but soon after discovering it, she knew that she’d prefer to focus her efforts on the lifting portion and leave the running and agility portion behind. Her coach saw great potential there, connected her with an Olympic weightlifting coach, and the rest is history.

While Brandi was discovering weightlifting, she also was beginning her journey at UPMC Sports Medicine. Having sustained back-to-back meniscus tears in both knees, she could not perform at the level she needed to, so she decided to see an orthopaedic surgeon. The surgeon evaluated her, sent her for MRIs and x-rays, prescribed elevation and rest, and had her use a brace and crutches. After seeing little improvement, the surgeon used steroid injections to reduce the amount of fluid in Brandi’s knees and sent her to physical therapy at the UPMC Freddie Fu Sports Medicine Center.

“I felt pretty defeated when I went to have my knees evaluated initially,” Brandi says. “My quality of life, as young as I am, was low, and it was depressing. There is too much life left to be talking about the physical limits I have.” Her outlook began to change a bit as she progressed through physical therapy, eventually being able to remove her brace and walk pain-free in tennis shoes without crutches. However, walking pain-free and squatting upwards of 200 pounds pain-free are two completely different ballgames. Knowing that she needed more training to get back to her competitive state, her physical therapist walked her over and introduced her to Ron DeAngelo, MEd, CSCS, director of sports performance, at UPMC Sports Medicine.

“Right from the beginning, it was clear that he had a fundamental understanding of the movements I needed to perform for my sport,” says Brandi. “He was prepared to help me achieve the motion I was looking for, beyond walking and being pain-free.” Not only did Brandi begin to feel significant improvement in her first few sessions with Ron, but she was also learning the tools to stay limber and active beyond her time spent with him. She notes that accountability plays a big role in her improvement, as Ron can tell (based on her mobility) whether or not she has been doing her homework.

An Inside Look at Sports Performance Sessions 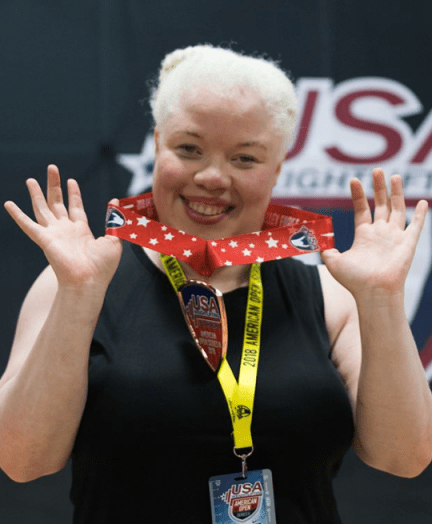 In their regular sessions, Ron and Brandi work on hip rotations, ankle dorsiflexion, symmetry and balance, balloon breathing, overhead work, squat rehabilitation, shoulder maintenance, myofascial training, and more. “The myofascial training has made the most difference out of everything we do because I’m so tight all the time,” says Brandi. And they almost always use the Hypervolt®—a massage device that helps relieve muscle pain, increase range of motion, and promote circulation—to end their sessions. “It’s like the cherry on top,” Brandi says. She stresses that this device makes all the difference, as Ron can apply it to each side of her spine, ultimately helping her feel looser and enabling her to lift the barbell above her head further than she could before.

She shares that, by identifying her weaknesses, such as the way she compensates for her right hip by relying on her left hip, Ron taught her to correct them. “I would never have imagined this was possible when he first identified the issues I was having with compensation,” Brandi says, reflecting on her past goals compared to what she’s striving for now. “It’s serendipitous. He’s an artist in the sense that his eyes can see movement and identify what can fix it– what can release mobility. He has a vision.”

At the time Brandi started to work with Ron, she was his only weightlifter, which she says made her slightly skeptical of how much he could help her. But he quickly relieved that worry. Despite lacking high-level knowledge of Olympic weightlifting, Ron knew what movements were necessary and was able to help Brandi achieve those, priming her joints for advanced performance. “My favorite thing about Ron is he’s such a student of sport and movement. His expertise is inspirational and dynamic; it’s a living, breathing thing that continues growing, which fosters a lot of trust. I know that he isn’t going to have me continue doing the same thing. As I improve, it means he has to keep showing me something different and more difficult. Ultimately, he’s a thought-leader and student of his craft. He’s always trying to improve and push it to the next level. I respect that so much,” Brandi says.

During the COVID-19 pandemic of 2020, which is in full swing as we write Brandi’s story, this Pittsburgh native has experienced first-hand the resilience of the city’s incredible fitness community. As someone who never liked to work out from home in the past, that has become her reality with a stay-at-home order in place. Fortunately, the South Side gym where Brandi took her very first cross-training class graciously lent her barbells, plates, and other equipment so that she could continue to work toward her 2021 goals. 2020 goals for many weightlifters have, unfortunately, been put on hold given the cancellation of most national competitions, including the Pan American Games.

Before the quarantine began, Brandi was still working with Ron, and she plans to continue her weekly regimen with him when things return to normal. For now, she says that she’ll continue to practice from the safety of her garage. Initially thinking these circumstances would be an acceptable reason to take a break from working out, Brandi says, “My knee pain returns as a direct reflection of how little I’ve been doing my drills. It would be easy to say that I don’t need to put in the work all the time, but that would be a lie. Our bodies adapt to what they’re used to doing and if I relax my body becomes unprepared.”

“My confidence is back,” she says, reflecting on her journey from injury to competition. “I don’t fear running late, having to run down steps or make a quick left or right. I’m not afraid to move, and I don’t think about my injuries anymore. My brain has adjusted. If I can do this, then I can do that. What’s the next goal? It keeps me hungry and excited.”

Plus, she shares that Ron really appreciates the sport of weightlifting now and even tunes in to watch her competitions. The UPMC Sports Medicine team is truly grateful to have treated an inspirational person like Brandi and wishes her the best of luck in her upcoming competitions.

While physical therapy services are typically covered by health insurance, sports performance services typically are not. Please consult your health plan if you have questions about your coverage.