“The fact that Ron let me take photos and video, and then just went beyond by showing me around the facility, meant a lot. He really took his time and didn’t try to rush me out of there. I was grateful for that—and grateful that the routine worked.” –Julie

Julie, a 54-year-old marathon runner, is an elite member of the Atlanta Track Club Masters Team, completing her marathons in the low threes—that’s nearly three hours flat. After recovering from a hamstring injury that she ran on for about two years, her marathon times were suffering, and Julie was ready to get her times to where they had been prior to injury; she wasn’t ready to accept that she couldn’t bounce back. And she was right; she didn’t have to stop there.

Finding Someone to Turn To

A friend of the DeAngelo family, the brother of our very own Ron DeAngelo, MEd, CSCS, Director of Sports Performance, referred Julie to Ron. “Hearing me talk about needing an extra push to get back to the runner I was before, Randy said, ‘Ron has a new program that seems to be helping a lot of runners improve. You should go check it out,’ and that was all it took,” Julie says. She reached out to Ron in July of 2019 and within a matter of days had a flight from Atlanta to Pittsburgh to participate in a Saturday morning session with him.

Upon arrival at the UPMC Freddie Fu Sports Medicine Center in Pittsburgh’s South Side neighborhood, Ron assessed Julie’s flexibility and asked her about her current warmup. “I run 10 to 20 miles a day. It’s just what I do,” says Julie. “When Ron asked me how I warm up, I couldn’t really say that I do. I just use the first couple of miles to gradually get into pace.” This knowledge helped Ron incorporate the importance of a solid warmup into his instruction, in hopes that Julie could leave the training feeling how helpful a warmup can be.

Then, Ron jumped right into teaching Julie his Game Day Speed routine, which is part breath control and part joint preparation. “I thought he was joking me at first,” Julie reflects, “just because I looked silly laying on the floor with my knees at a 90-degree angle, feet on the wall, ball between my knees, breathing through a balloon, and lifting my pelvis for support. But when he asked me how I was doing, I felt really good. My diaphragm was so open, and I felt like I had a ton of oxygen in my lungs.”

What Julie describes here is a balloon breathing technique, adapted from the Postural Restoration Institute’s program, which makes up just one part of Ron’s Game Day Speed routine. The other half of the routine consists of several targeted stretches and mobilities to help loosen up and prep the joints. She shares that they worked on her ankles, knees, elbows, and especially her hips. Female runners are prone to tightness in the hips and hip injuries, so hip flexor and hip adductor stretches were especially important to include in Julie’s training.

A Keepsake to Carry with Her

Since Julie was to return to Atlanta in just a few days, she wanted to be sure she could take this program with her. “The fact that Ron let me take photos and video, and then just went beyond by showing me around the facility, meant a lot. He really took his time and didn’t try to rush me out of there. I was grateful for that—and grateful that the routine worked,” Julie says. As soon as she completed her first go at the Game Day Speed routine, she took a 1-mile run around the South Side to see if she noticed any difference; “I felt great,” she says.

“Since then,” Julie says “I’ve been doing the breathing and stretching religiously every morning before I run, even on race days. I haven’t taken a day off from the routine. It can be a little awkward blowing into a balloon when warming up for a race, but it’s worth it. I’ve seen great results.” Not only does the routine help her feel looser, but she shares that the breathing technique has helped her tremendously in the hot, humid, and hilly region of Georgia in which she lives. Typically running in a group of about 12 women, all younger than her, Julie noticed their heavy breathing as they tackled hills. “Meanwhile, my breathing was relaxed,” Julie says. “The girls are always interested to hear what I’ve learned about running, but when they saw my race times decreasing, they were particularly interested in learning about Ron’s program. I’ve encouraged them to go visit him to see it firsthand.”

OrthopaedicsKatie’s Story: A Mother’s Journey from Hip Injury to Half Ironman

OrthopaedicsKatie’s Story: A Mother’s Journey from Hip Injury to Half Ironman

Improving with Every Stride

Julie mentioned that since she’s been practicing Game Day Speed, she falls into her race pace much sooner; she also spent some time reflecting on what the routine does for her nerves. “We all get butterflies before a race,” she says, “but this makes me feel like I have more control over what I’m about to do. I’ve been amazed by how calm I’ve felt.” This calm headspace that is sometimes achieved by running alone has proven important as a great source of energy and stress relief for Julie and many other runners.

Reflecting on her running career up to this point, Julie shares that she began to run in middle school as a sprinter; she tried cross country but found it boring because no one was around her (she was out ahead of everyone of course). She participated in one year of competitive running in college but mostly just kept up with running as a hobby. Later on, after having a family, Julie picked up running again and learned from a friend that she could run for charity. In her late 30s, Julie ran her very first marathon for Team In Training, raising money for the Leukemia and Lymphoma Society. Marathoning became a passion as she moved up the team ranks, earned her coaching certification to teach others, and finally began to knock out her own race times qualifying her for membership in the Atlanta Track Club. She’s been running with them now for more than a decade.

Coming Back for More

“A few months after meeting with Ron and doing his routine, I was back in the low threes,” Julie says. “I grasped a 3:10 in Pennsylvania and then a 3:16 in Alabama where I became the fastest 54-year-old to ever compete in the state. I owe a lot of that to Ron’s program. To be able to bounce back like that at my age, I thought that was pretty good.” Julie shares that Ron kept in touch after her training to check in on those races and recently reached out about a myofascial training he’s begun to teach. She plans to run the Boston Marathon this year, which has been postponed to September, and hopes to return to Pittsburgh at some point in 2020 to work with Ron again. Julie says, “Even today, the progress I see keeps me feeling so motivated to keep going. I can’t wait to see how I feel tomorrow.”

All of us here at UPMC Sports Medicine are inspired every day by incredible athletes like Julie. We wish her nothing but the best in her continuous training and upcoming competitions. 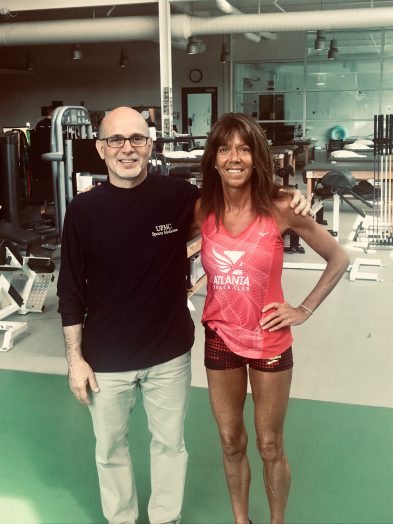 While physical therapy services are typically covered by health insurance, sports performance services typically are not. Please consult your health plan if you have questions about your coverage.