Austin A. Davis was the first Black American outside of the city of Pittsburgh to win an elected state office in southwestern Pennsylvania. A native of McKeesport, Pa , Rep. Davis captured 74% of the vote to lead the 35th district of the Pennsylvania House of Representatives in a January 2018 special election. He holds seats on the House Appropriations, Insurance, and Consumer Affairs committees and serves as a deputy Democratic whip. His district includes three of the region’s most racially diverse and economically challenged communities: Clairton, Duquesne, and McKeesport. 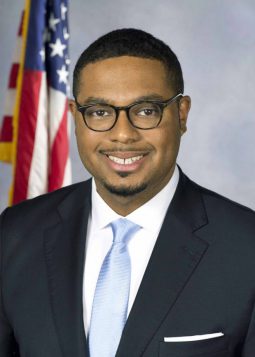 What led to your career in politics?

Growing up, I was always interested in government. But it wasn’t until high school that I started thinking about government as a solution. I was concerned about the violence I saw happening in McKeesport, particularly among young people. I decided to go to a city council meeting.

I discovered that only one person on council looked like me, despite the city’s significant minority population. And its members weren’t even my parents’ age — they were my grandparents’ age. I felt government needed to be more representative of all the people they were serving.

I approached then-Mayor Jim Brewster (now a state senator) with an idea for a youth advisory council, and he graciously allowed me to get involved. Our advisory council took on a number of community projects. We got involved in raising awareness about youth violence and cleaning up different neighborhoods.

What racial and health care disparities concern you most?

I was a student in the McKeesport Area School District, which was and still is predominantly Black American. Then and to this day, it’s severely under-resourced. Compounding that problem is the fact that many of its children live in poverty. In fact, 50% of all the kids in McKeesport, Duquesne, and Clairton live in poverty. If you’re looking for equity and racial issues, look no farther than the Mon Valley.

Food insecurity is a major deterrent to good health in our region. The city of McKeesport has five grocery stores, but Clairton has none, and there’s no prospect of one moving in. Duquesne has one grocery store, and it’s on the verge of closing. There once was a time when people lived, worked, and shopped all in the same community. But our world has changed. The resources we need to adapt — like affordable and dependable transportation — have not kept up with the people who need them the most.

How has COVID-19 affected the communities you serve?

But when the coronavirus hit, we just threw the bill out the window. It didn’t make sense to try to raise revenue when unemployment rates jumped from 4% to 12% in literally one month.

I’ve always been able to learn firsthand what people are really struggling with through the calls that come into my office. During COVID-19, the huge concern initially wasn’t unemployment: it was health care. Many of the communities that I represent already had significant health disparities before COVID-19 arrived, including barriers to health care access. COVID-19 only magnified those issues. How can we ensure that folks are getting tested? How can people even get transportation to the medical centers to get tested?

Local colleagues and I banded together to try to find answers. We reached out to all the health care providers in the region, including UPMC, UPMC McKeesport Hospital, and the UPMC Latterman Family Health Center. Their collective response was and continues to be terrific.

You’ve probably seen recent reports that say this virus seems to be hitting Black Americans and other people of color harder than other populations. My fellow House representatives Jake Wheatley and Summer Lee and I worked to create a COVID-19 health equity task force. We’ve met regularly with Dr. Rachel Levine, Pennsylvania’s secretary of health, and Dr. Debra Bogen, director of the Allegheny County Health Department. We pushed very hard to expand testing to our federally qualified health centers in the region because we know that in low-income communities, those centers are often the first line of defense for health care needs. It’s no accident that I located my office next to a federally qualified health center.

But it’s hard to both lead people and adapt to the moment, especially when that moment is a time none of us have ever lived through. There’s no one with first-hand experience in a better way to do things. While some will disagree, I think Pennsylvania is doing significantly better than other places. Although we still have to be vigilant, we have made strides.

Is there one particular issue in terms of racial disparities that troubles you most?

There’s no one specific thing, but I will say tackling this problem has to be a collective effort. It’s not a matter of one person or one organization addressing the issue. It has to be a partnership. The health care community needs to address disparities and biases within their systems. Those of us in government need to make sure that we are ensuring access for people living in marginalized communities. That means transportation, making health care affordable, and making sure we are adequately funding public health services.

I’ll share a personal example. Studies show that Black Americans tend to do better if they’re treated by diverse doctors. When I was elected to the House, I had to change insurance companies. It took me two years to find a new doctor I was comfortable with. If I found that process difficult, imagine how hard it is for a community member who can’t tap into the same resources that I can.

There’s no silver bullet to fix the challenges of racism in medicine and health disparities in our communities. But if we all continue working in our respective spaces to address the issues within our wheelhouses, we will see success.

Health disparities are preventable and disproportionate health conditions that exist among all ages in a certain population. The first step to prevent health disparities is by learning about them. UPMC is committed to driving health education and programming, partnering with our community, and training health care providers to ensure all individuals and families have the opportunity to live healthier lifestyles.

UPMC is a world-renowned health care provider and insurer based in Pittsburgh, Pennsylvania. Learn about UPMC’s position on public health issues and gain a better understanding of the initiatives that advance the health care industry.