“Running brings me so much joy. As a runner himself, Dr. Onishi understands the sentiment of competitive runners. Now I’m meeting new goals thanks to Dr. Onishi and UPMC.” –Melissa

A competitive runner, wife, mother, and elementary school teacher, 33-year-old Melissa never takes a day off from running. “I have run about 60 miles each week over the last year,” she says. When she experienced fatigue along with pain in her Achilles tendon, she worried about taking time off to have it looked at. Like many runners, Melissa’s mental health and well-being are directly linked to her running, and so she didn’t really consider time off as an option. Fortunately, Melissa wouldn’t have to make that decision. Thanks to Kentaro Onishi, DO, a physiatrist with UPMC Physical Medicine and Rehabilitation, she hit the ground running after minimal time off for treatment. 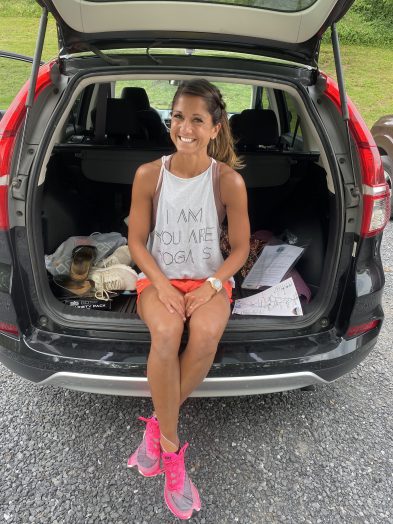 In summer 2019, Melissa became concerned about fatigue that increased daily, especially while running. Like many mothers with young children, she ignored it for a few months. “When you’re a mom and not sleeping, you think that’s all it is. But my performance was really slipping. After running an Erie marathon in September, I felt horrible and called Dr. Onishi immediately,” she says.

Dr. Onishi is a marathon runner himself and a leading expert in treating endurance athletes and tendon injuries. Melissa ran with his “We Be Crazies” running group in 2019. “To my surprise, the first thing Dr. Onishi suggested was to get blood work. He thought the symptoms I described sounded a lot like anemia,” says Melissa. “He was right.” Her blood work showed extremely low levels of iron. She had two iron infusions in October.

Within two weeks, Melissa was feeling more energetic, more like herself again. However, she was still dealing with a painful Achilles. “I didn’t know I was anemic, but my stride was compromised because I was so tired. That led to the Achilles tendonitis/tendinopathy and bursitis of my heel,” she says. “I was hesitant to address it, because I need my daily run. I really do not take a day off — I ran six miles right before my son was born and started again only three weeks after my c-section.” Knowing she didn’t plan to take a break from running, Dr. Onishi first prescribed several weeks of physical therapy. It wasn’t enough to resolve Melissa’s Achilles tendinopathy.

RehabilitationStill Fighting: After Losing Legs in Crash, Firefighter Refuses to Give in

RehabilitationStill Fighting: After Losing Legs in Crash, Firefighter Refuses to Give in

During a follow-up visit in December, Dr. Onishi suggested mechanical tendon scraping for her Achilles tendon. “I was nervous when he said scraping. But it turned out to be a five-minute procedure with a local anesthetic — and I felt nothing,” says Melissa “I know I was still a bit numb afterward, but when I ran that same evening, I could put pressure on my Achilles and did not feel that pain. It was amazing.” 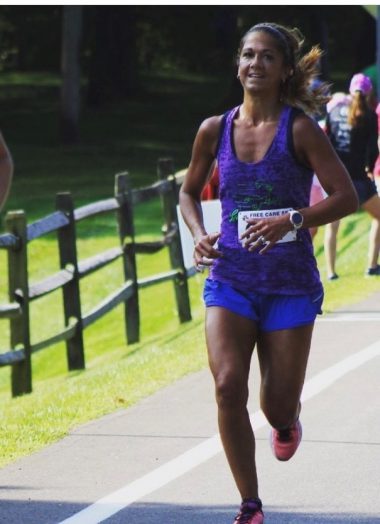 Within a few weeks, Melissa was running with absolutely no pain in her Achilles and heel. Able to train injury-free, Melissa ran personal bests at every distance she’s raced since January 2020. She cut two minutes off her 5k time, and qualified for the prestigious Boston Marathon in June.

Working Together to Reach New Heights

“The treatment Dr. Onishi chose for me shows his expertise in the area. We discussed surgical treatments, but he also shared innovative nonsurgical treatments using ultrasound that would allow for a safe and swift return to training. He can relate because he runs. He can make the appropriate diagnosis because he listens. And he can treat the injury in accordance with your lifestyle because he cares,” says Melissa. “As a strong-minded runner, it has always been hard for me to accept help. But between Dr. Onishi and my physical therapists, I’ve made incredible progress. I trust them — and I have so much respect for them. And now I see what can be done through their expertise.”

Melissa says running is like breathing to her. She believes the stars truly aligned when the injury she sustained just so happened to be the specialty of a doctor who’s also a fellow runner. This experience has eased her fears that doctors will just sit you out of the game —that they don’t understand an athlete’s lifestyle.

She says, “I don’t know where I’d be competitively had I not undergone this specific procedure. I thank him over and over again. Running brings me so much joy. As a runner himself, Dr. Onishi understands the sentiment of competitive runners. Now I’m meeting new goals thanks to Dr. Onishi and UPMC.”

The UPMC Department of Physical Medicine and Rehabilitation, we strive to improve your function after injury or illness. We treat functional, pain-related, and neurological conditions, helping with both physical and emotional disorders. We provide inpatient therapy at the UPMC Rehabilitation Institute, and we also operate several outpatient clinics throughout western Pennsylvania. We also are a leader in research to develop new technologies and tools for the highest quality care.