“Dr. Onishi saved my season. I’m so grateful that we found the right person to help me get back to running without pain.” –Mia

High school junior Mia has made history in her cross country career, but it’s been far from an easy road. Beyond the intense training, including running more than 50 miles per week, she was experiencing excruciating hip pain – the type that shoots through you then endlessly lingers and aches. Fortunately, she found the care she needed at UPMC and got back to her record-breaking runs.

Mia has been running since sixth grade and has improved with every stride. After having to drop out of nationals due to hip pain, she bounced back to have an undefeated junior cross country season in 2020. She also won the Pennsylvania Interscholastic Athletic Association (PIAA) Class 3A championship in Hershey for the second year in a row, finishing with a time of 18:28.

Since the PIAA began girls cross country championships more than 40 years ago, Mia is only the second runner from the Western Pennsylvania Interscholastic Athletic League (WPIAL) to win back-to-back state titles in the largest classification. And it doesn’t stop there. Mia just placed 9th in a national meet in November and is always up for more competition and more opportunities to show the running world what she can do – including considering where collegiate sports may take her. “Running is a huge part of my life,” Mia says. “It consumes me a lot, but I have a very strong passion to run. It has shaped me as a person and become a part of me.” 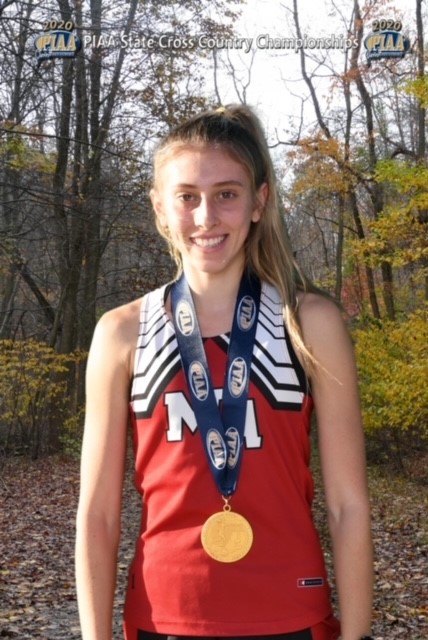 Unfortunately, pain also had become a part of Mia’s life, causing her to back out after qualifying for 2019 nationals in San Diego. Unbearable pain in her right hip, that had begun during her freshman year and steadily worsened, just wouldn’t seem to resolve itself. From December 2019 through summer 2020, Mia searched for a solution while attempting to continue running. She went to several doctors and physical therapists without success until she found Kentaro Onishi, DO, of the UPMC Department of Physical Medicine and Rehabilitation (PM&R) and Department of Orthopedic Surgery. “Nothing got my hip to where it needed to be up until that point,” says Mia.

Mia and her mom met with Dr. Onishi at the UPMC Lemieux Sports Complex in Cranberry Township at the beginning of the fall 2020 cross country season. Diagnostic ultrasound helped him diagnose her with severe inflammation in the quadratus femoris muscle around the outside and back of the hip that was due to a type of hip impingement. Dr. Onishi then administered an ultrasound-guided steroid injection into the hip. It was like night and day for Mia’s hip pain, and she was able to return to training within a few days.

Returning to the Race

Not long after the cortisone shot, as well as several rounds of physical therapy with Cara Troutman-Enseki, DPT, OCS, Mia was on her way to running success once again. She describes the PT as being different from the PT she had tried over the prior several months. “It felt more tailored to me as a person and a runner,” she adds.

The injection option is ideal for runners who do not want to take much time off from training. It can help lessen pain by reducing inflammation in soft tissues like muscles and tendons with minimal downtime. 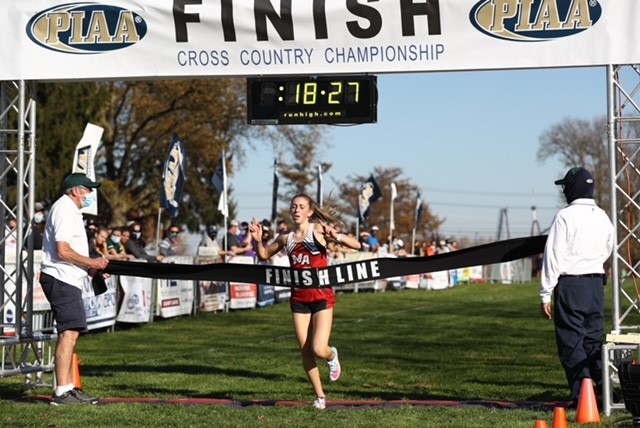 “I’ve now had little to no pain at all, which is amazing considering that I was not even walking correctly after races earlier this year,” Mia says. Dr. Onishi reevaluated her about eight weeks after the injection, and she said it has been smooth sailing ever since.

As Mia continues to train for her junior spring track season and her senior cross country and track seasons to follow, Dr. Onishi has been in contact with her family to ensure she’s doing well and to offer words of advice as both a physiatrist and runner himself.

“Dr. Onishi saved my season,” says Mia. “I’m so grateful that we found the right person to help me get back to running without pain.”

To learn more or schedule an appointment with UPMC Physical Medicine and Rehabilitation, please call 1-800-533-8762 or visit our website.

At UPMC, we strive to improve your function after injury or illness. We help people recover from functional, pain-related, and neurological conditions, with both inpatient and outpatient care available. We are dedicated to providing you with exceptional clinical care and focused on developing new technologies and treatments to help you achieve mobility and maintain independence. Find a provider near you.