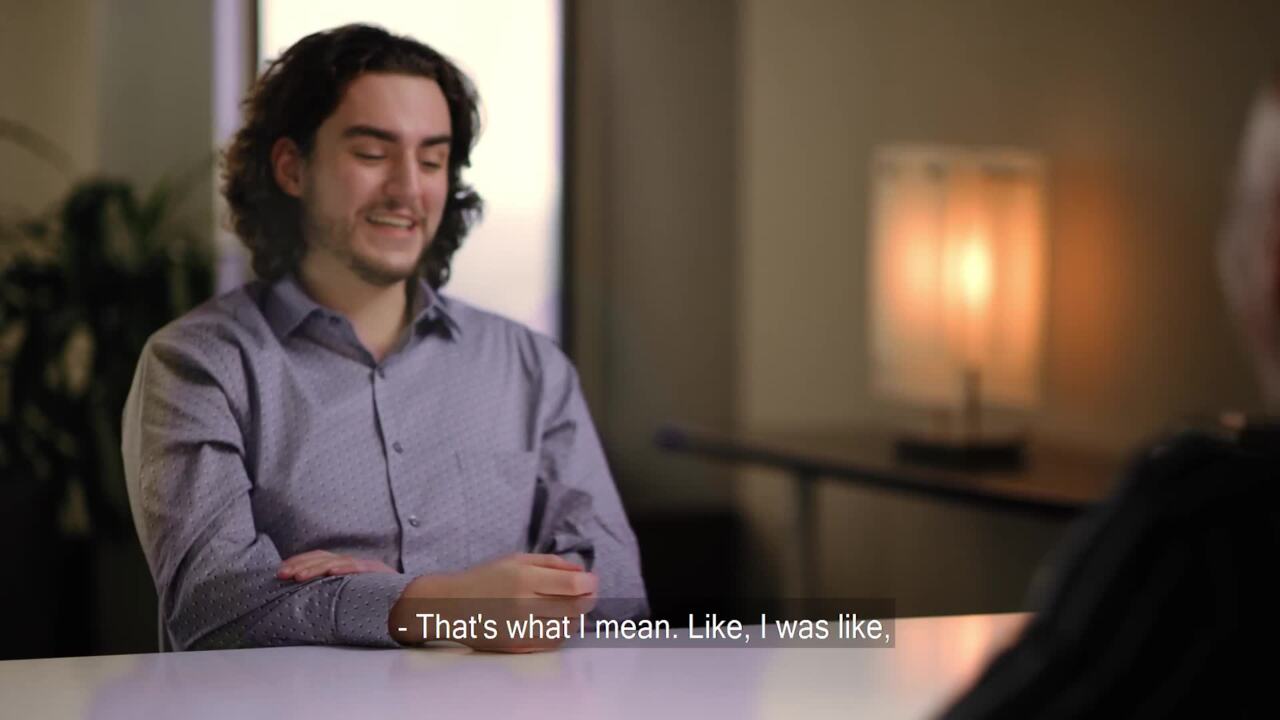 A high school trip to a local ski resort had turned disastrous — a fall on a ski jump left Ryan with no feeling below his waist.

Ryan knew it was bad, and the EMTs confirmed it when they determined he would have to be sent by helicopter to Pittsburgh for advanced care.

“I was terrified, I really was,” he says. “The pain and fear, I never felt so afraid. And the entire helicopter ride to Pittsburgh, I remember I prayed the entire way there.”

His prayers were answered. Quick thinking by EMTs helped him get to UPMC Presbyterian, where he received the spinal surgery he needed.

Then came months of grueling rehabilitation at UPMC Mercy. Ryan slowly regained the ability to walk and run with the help of his therapists.

Now a sophomore in college, two years removed from his injury, Ryan continues to make progress. And he appreciates every achievement.

“Where I’m at today — this is more than I could have ever wished for,” he says. “I never can complain about any of this because the fact that I’m upright is more than enough of a blessing.”

Episode 4 How a Pioneering Weightlifter Got Back on Her Feet

Episode 5 How an Assistant Principal Beat the Odds to Survive

Episode 6 How a Marathoner Kept Running After Triple Bypass Surgery

Viewing NowEpisode 7 How a Student Overcame a Traumatic Spinal Injury

‘In the Blink of an Eye’

Although he wasn’t an experienced skier, Ryan joined the ski club during his senior year at his high school near Johnstown.

In January 2019, the club took a trip to a local ski resort. Ryan saw his friends doing the ski jumps and decided to try one himself.

“When you’re 18 and in high school, you think you’re indestructible,” Ryan says. “That’s seriously what I thought. I thought, ‘What’s the worst that could happen? I’m going to break an arm or something?'”

Ryan doesn’t remember much of what happened next but, from other accounts, he knows he landed awkwardly and crashed.

Although Ryan could feel his feet, he was in great pain and couldn’t get up. Bystanders called for help. By the time crews got him to the bottom of the ski slope, he had no feeling below the waist.

“It all just went by so fast — it was in the blink of an eye,” he says. “One moment you’re just living your normal life, and the next moment your entire life has changed.”

Subscribe for articles and more from Ryan Shazier’s 50 Phenoms.

The EMTs who evaluated Ryan immediately after the accident made a quick, crucial decision: he needed to go to Pittsburgh for treatment and called for a helicopter to take him to UPMC Presbyterian.

“The helicopter ride, I grasped pretty well what was happening,” Ryan says. “I was finally able to comprehend that, ‘Hey, holy heck, I’m paralyzed.’ And obviously, I was in a world of pain. That was kind of a coming-to-Jesus moment.”

When the helicopter landed at UPMC Presbyterian, the trauma team rushed Ryan to get x-rays, an MRI, and a CT scan.

Ryan’s uncle lives in Pittsburgh, so he was the first family member to arrive at the hospital. The look on his uncle’s face told Ryan the seriousness of what was happening. Soon after that, his parents and grandfather got there.

“The first five minutes were probably just a lot of crying and telling each other that we love each other,” he says. “I tried to explain to them what happened, but I couldn’t really give them a good answer.”

Ryan’s scans showed he had multiple back and spinal injuries. The most serious injury was a spinal fracture that left Ryan’s L1 vertebra compressing his spinal cord, causing paralysis below the waist.

“He had a really unfortunate injury in that it was in a very transitional area of the spine,” says Jeremy Shaw, MD, director, Spine Education, UPMC, and Ryan’s surgeon. “One level of the spine can make a huge difference in terms of function.”

“As a team, we try to get patients with spinal cord injuries to the OR as quickly as possible,” Dr. Shaw says. “Time is crucial to saving spinal cord function.”

Sports Medicine50 Phenoms: How a Pioneering Weightlifter Got Back on Her Feet

Sports Medicine50 Phenoms: How a Pioneering Weightlifter Got Back on Her Feet

‘Give It Your All’

In a surgery that lasted a few hours, Dr. Shaw and his team inserted two rods and 10 screws. They also reduced Ryan’s spinal fracture, which took pressure off his spinal cord.

“He had injured all the structures around the spine — so he injured bone, ligament, and muscle,” Dr. Shaw says. “All these things were damaged and disrupted. The purpose of the rods and screws is to put the vertebrae back where they belong anatomically, restoring the spinal canal area, and then hold it all in place to allow him to heal.”

The day after the surgery, Ryan asked Dr. Shaw if he would walk again.

“He told me that he could not promise me anything, couldn’t promise me I’d ever walk, I’d ever stand again,” Ryan says. “And I completely understand why he did that. He was still optimistic, and that was the good news. But that was probably the toughest news I have ever heard in my life.”

With so much life ahead of him, Ryan wanted to regain as much function as he could. And he also knew it would take a lot of work to get there.

“My main thought at that time was, ‘Try,'” Ryan says. “Give it your all. What’s the worst that happens? Maybe I get better, maybe I don’t, but I knew one thing. I was going to try my hardest, at least. I wasn’t just going to give up.”

Ryan met his physical and occupational therapists when he was still at UPMC Presbyterian. After a short stay at UPMC Montefiore, he was transferred to the UPMC Rehabilitation Institute at UPMC Mercy for the bulk of his rehabilitation.

Joseph Everhart, DPT, NCS, a physical therapist with UPMC Centers for Rehab Services who worked with Ryan extensively, said Ryan was “on the same page” with his therapists from the start. He knew he had a difficult process ahead of him.

“He didn’t have any notions that he was going to make an instantaneous full recovery within a couple of weeks,” Joseph says. “He knew this was going to be a long haul. He was really motivated from the start, ready to listen, and ready to do pretty much everything we threw at him.”

The early stages of Ryan’s rehab involved strength and stretching exercises to give the team an idea of what they were working with and what Ryan could and couldn’t feel. They then expanded to tasks like getting in and out of bed and a wheelchair and using the wheelchair for movement.

Although Ryan experienced some difficult moments, he credits his family, his faith, and his therapy team for giving him the motivation to continue.

As the weeks went on, Ryan began to walk with the help of devices like braces, walkers, and crutches. He had one goal.

“By the end of his rehab, he wanted to be able to take some steps without any devices,” Joseph says.

On his last day at UPMC Mercy, Ryan was working with another physical therapist on standing exercises. He was standing inside a pair of parallel bars when she told him to try walking.

“I didn’t even make it down to the end without breaking down into tears. I mean, the first steps that I ever took happened there.”

‘He Worked His Butt Off’

Ryan calls the day he left UPMC Mercy a sad one because of the relationships he’d built with his rehab team. But after leaving full-time care, he continued his therapy and made progress.

A few months after his injury, Ryan walked across the stage at his high school graduation.

“He worked his butt off for months and months,” Joseph says. “On days he didn’t come in for therapy, he was doing therapy at home.”

The injury and the rehab left a mark on Ryan beyond just the physical impact. His positive mental outlook and his faith helped him succeed. Now a sophomore at the University of Pittsburgh-Johnstown, Ryan hopes to help others; he recently changed his major to psychiatry.

“I want to hopefully get to help some people who have gone through similar things or traumatic experiences,” he says.

In fact, Ryan is already doing that. He volunteers as a peer mentor for people going through rehab at UPMC.

“His motivation, maturity, and positive mentality is awesome and made him successful,” Joseph says. “The fact he’s willing to share that is huge.”

Ryan isn’t yet back to 100%, but he’s still improving. Among other activities, Ryan likes to walk and run, play basketball and baseball, golf, cycle, and roller skate.

“Anything that I used to be able to do, I strive to try to do,” Ryan says. “When I was in the hospital, if I got a toe to twitch, or I could feel something different, or something came back, it gives you this sense of joy and appreciativeness and happiness. You’re so overwhelmed with emotions when something happens. You’re so full of joy and excitement.”

As a national leader in advanced orthopaedic care, UPMC treats a full range of musculoskeletal disorders, from the acute and chronic to the common and complex. Whether you have bone, muscle, or joint pain, we provide access to UPMC’s vast network of support services for both surgical and nonsurgical treatments and a full continuum of care. As leaders in research and clinical trials with cutting-edge tools and techniques, UPMC Presbyterian Shadyside appears on U.S. News & World Report’s rankings of the top hospitals in the country for orthopaedics.