It was the final minutes of a tournament basketball game in spring 2021, when Ben Thomas, 17, drove the baseline, planted his foot to turn, and felt a sudden pop and searing pain in the back of his left knee.

“The pain was really bad for a moment, but it went away. I didn’t think it was that serious,” says Ben, who sat out the rest of the game.

Back home in Greensburg, Ben went to see the UPMC Sports Medicine athletic trainer at Greensburg Salem High School where he was a point guard on the boy’s basketball team. Barbara States, LAT, ATC, evaluated him and was immediately concerned. 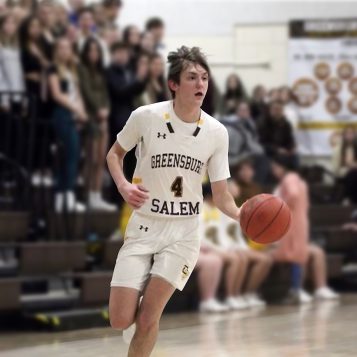 Ben, who aspires to play college basketball, was devastated to learn he needed reconstructive ACL surgery to regain full function of his knee. Recovery would take nine months.

“I was in shock. Every emotion was running through my head,” says Ben, who was a junior at the time of his injury. “But I was determined to get back to playing. My goal was to do what the doctor said and work hard.”

In May 2021, Dr. Hughes performed the surgery at UPMC East, replacing the torn ACL with a quadriceps tendon from Ben’s own leg. Two weeks later, he began physical therapy.

Greensburg Salem is one of 75 partner high schools with UPMC Sports Medicine, which offers seamless and coordinated care from an injured athlete’s diagnosis to treatment, rehabilitation, and return to play. That partnership offered Ben the opportunity to work on his rehabilitation with the school’s athletic trainers in addition to his regular physical therapy. Ben was then able to stretch out his physical therapy visits over his nine-month recovery.

Once a week he worked with physical therapists at UPMC Rehabilitation Institute in Greensburg. But he spent five days a week working with Barbara and her husband, Mike States, MS, LAT, ATC, who are both athletic trainers at Greensburg Salem High School.

“We’re all part of the same team,” says Barbara. “We collaborated with the physical therapists to supplement Ben’s rehab program.

“My goal was to help him recover and to keep him stimulated and active in the safest way possible. It gave him more of an edge,” she adds.

Ben worked with Barbara and Mike throughout the summer and fall. They worked on different exercises assigned by the physical therapists and followed their lead on weight training protocols. As he progressed, they focused on building the strength of his entire body, not just his injured knee. They also worked on his movement, including landing and jumping mechanics.

“I felt like everyone was behind me. They all worked together and had everything planned out for me,” says Ben. “It was tough. What kept me going was that desire to play basketball again.”

Before clearing Ben to play, Dr. Hughes required him to undergo a formal evaluation by his physical therapists to ensure he was strong enough.

In January — nine months after tearing his ACL — Ben was back on the court playing for the Greensburg Salem High School basketball team. In his first game, the point guard and team co-captain scored 40 points — a feat he repeated in the next game with another 40 points.

Barbara described the game as “thrilling.”

“Ben was ready. He put in the time and worked hard. It was so exciting to see him play without any fear. He just went out there and did what he is so good at doing,” she says.

“It felt really good to be back. I felt like everything was going in,” says Ben, who looks forward to playing next year as a college freshman. He’s received interest from several college coaches.

“I can’t imagine myself not playing basketball. I love everything about it. I’m grateful to everyone I worked with. They all made it as good an experience as possible and got me back as fast as they could.”

To learn more about UPMC Sports Medicine or schedule an appointment, please call 1-855-937-7678 or complete a form online.