Kim Alfieri has gotten to know the team at UPMC Cole well over the years, even if that meant seeing them under some of the worst circumstances.

She first met Chad Jackson, PA-C, who specializes in orthopaedics, when she sought follow-up care for her son’s injured elbow when he was in elementary school.

In 2021, her son, Preston tore his ACL (anterior cruciate ligament) playing basketball in Smethport. The personal and professional care her son received during that pivotal time in his high school sports career made a world of difference.

“They’re not just invested in my kiddo, but I see it happen with any student athlete,” Kim says. “And it’s pure, genuine kindness. It’s not just a job to them. They’re so invested in helping these kids.”

Quick Response in an Emergency 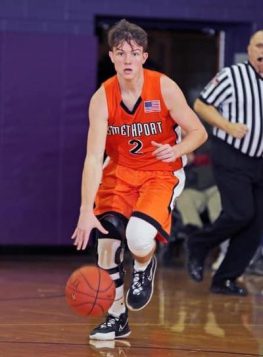 The day Preston Alfieri injured himself on the court in February 2021 was a stressful day for the entire family.

“As soon as Preston went down on the court during a play, I knew something was terribly wrong,” said Kim. “He hobbled off the court and Melissa immediately took him out of the gym for an evaluation.”Melissa O’Brien, UPMC athletic trainer, broke the bad news to Kim: Preston had likely severed his ACL.

Before Kim had time to stress, Preston had an appointment for care scheduled the following morning at UPMC Cole.

“This was at 8:30 or 9 at night,” Kim says. “I know we’re a small community and this might not happen elsewhere, but I cannot tell you how amazing that was.”

That night, Melissa sent Preston home with instructions to ice and wrap his leg. She fitted him for crutches in the locker room, as well. Kim and Preston went home that night knowing there was a plan in place to start the healing journey.

The next morning, Preston met with Chad Jackson who confirmed the ACL tear. But from the very beginning, he was careful to offer Preston and Kim options instead of simply telling them what to do.

“Chad was very thorough. He not only talked to me but talked to my son and put him at ease,” she says. “He explained things in depth and he didn’t tell us what the treatment was going to be — he gave us all the options.”

Three weeks after his high school injury, Preston had surgery with Bradley Giannotti, MD, orthopaedic surgeon, to repair his ACL. But even before that, he was already beginning physical therapy with Melissa in conjunction with his UPMC Orthopaedic Care team.

Both Chad and Melissa also shared personal stories with Preston about their own past injuries during his recovery, using these examples to encourage him to wear his brace and follow physical therapy treatment plans for a stronger recovery.

This past year, Preston was able to participate in the full basketball season following a total recovery.

More Than Just a Doctor

Throughout the experience, Kim came to realize that the attention her son was receiving was not just top-notch medicine. It was superior care because the team at UPMC Orthopaedic Care in Coudersport is invested in the community. Chad gave Preston one-on-one care throughout his recovery.

Kim’s parents also have seen Terrance Foust, DO, orthopaedic surgeon, and Dr. Giannotti on multiple different occasions, including through two knee replacements, and have experienced the same level of care and commitment.

Recently, when Kim discovered her nephew had injured his arm during summer break, she did not hesitate to recommend the UPMC Orthopaedic Care team to his parents.