Lifesaving Medicine When Life Turns on a Dime

Ben Garverick remembers virtually nothing about what happened to him on Wednesday, June 15, 2022. But it’s something his mother Joy — a critical care nurse — will never forget. 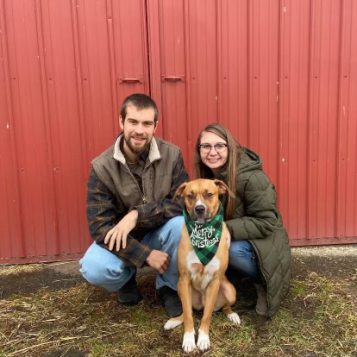 Ben Garverick is a strapping, outgoing 21-year-old who’s always been healthy and fit. “I work at a hot tub manufacturing company, and we build them from scratch,” he says. “It’s hard work but a great workout.”

After finishing a 10-hour shift, Ben went out to dinner with his girlfriend Morgan and her family. “When we got back to the house, we started to pull a water pump from the basement,” says Ben. “I was in the driveway cutting pipe — and that’s the last thing I remember.”

Morgan called 911 first, then Joy and Barry Garverick, Ben’s parents. The couple were at his side in a matter of minutes. Neighbors had already started doing CPR on their son.

After years as an intensive care unit (ICU) nurse, Joy now is an ICU case manager at UPMC Williamsport in North Central Pennsylvania. “I know what devastation looks like and I saw it that night,” she says. “Never in my wildest dreams did I think my 21-year-old son would go into cardiac arrest.”

When emergency services arrived, they followed protocol and drove Ben to the nearest hospital. “Unfortunately, he aspirated on the way to the hospital, resulting in major lung damage,” says Joy.

“Doctors just couldn’t get his oxygen saturations up.” It was clear Ben needed more advanced heart and lung care.

They decided to air-transport Ben to UPMC Williamsport. “I suspected Ben needed extracorporeal membrane oxygenation (ECMO) to help oxygenate his lungs,” says Joy. An ECMO machine delivers oxygen to the blood from outside the body. By relieving stress from the heart and lungs, it allows them time to rest and recover.

“As Barry and I drove to UPMC Williamsport, we looked up and saw the helicopter with Ben in the sky. We knew things were bad,” says Joy. 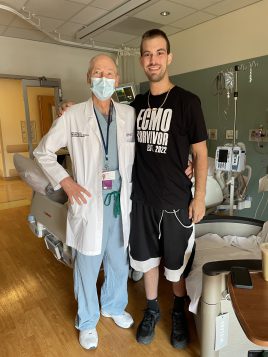 “At UPMC Williamsport, the cardiothoracic surgical team was ready and waiting to put him on ECMO. I work with these professionals every day. I knew Ben would have access to the most innovative and lifesaving care possible here.”

But despite being on ECMO, Ben’s vitals continued to decline. His kidneys were starting to fail and his liver had taken a hit from the shock. He was going into multisystem organ failure.

“And we were incredibly worried about his brain health,” says Joy. “You can’t rejuvenate brain cells, and he had gone hours without adequate oxygen.”

“Within 24 hours, everything started improving,” says Joy. “Ben was still on the ECMO, so his lungs were still very sick, but the rest of his organs were showing signs of improvement. I knew it would take time, so we just put our trust in everyone there.”

Ben was heavily sedated and placed on paralytics through the weekend so that he didn’t dislodge the Impella and ECMO.

“On Monday, they turned the paralytics off and weaned his sedation down. That morning, after arriving at the hospital to visit, Barry knelt at Ben’s bedside and said a prayer. Within 30 minutes, Ben was moving and he responded to us by nodding his head appropriately and opening his eyes. It was an incredible moment and gave us great hope.”

They removed the Impella the following day, and an echocardiogram showed Ben’s heart was back to normal. But given the damage to his lungs, he remained sedated and on the ECMO machine and a ventilator for another two weeks.

“When he was taken off both machines, Ben’s first comment was “‘Where’s Morgan? And how’s Scooby (the couple’s 2-year-old dog)?’ When we heard that, we knew we had our Ben back,” says Joy.

Ben remained in the hospital another week for therapy and observation. “My stay was wonderful, and I was very, very well taken care of, but it just kills me when I’m not busy doing something.” says Ben.

When they implanted the Impella, they even checked out his coronary arteries to be sure there was no blockage or deformity. “To help be sure it doesn’t happen again, they gave me an internal cardiac defibrillator,” says Ben.

Throughout his time in the hospital, Ben received care from many different teams. From his visits to the catheterization lab for examination to the collaboration between doctors and echocardiogram technicians, nearly every member of the heart and vascular team played a role in Ben’s treatment and recovery.

Admitted to UMPC Williamsport on Thursday, June 16, Ben was discharged on Saturday, July 9. Three days later, he celebrated his 22nd birthday. “That was the best present I could get — being out of the hospital and breathing fresh air.” Electrophysiologist Kashif Chaudhry, MD, gave Ben the green light to return to his job on September 15.

He’s back to working four 10-hour shifts each week. Other than some minor short-term memory issues — “and that’s kicking in and getting better every day!” — Ben says he feels great.

“I know we deliver great medicine here, but when it’s your own son, you see things with new eyes,” says Joy. “Every doctor, provider, nurse, physical, speech, occupational and respiratory therapist were amazing. I owe Ben’s life to this hospital.”

“The experience has changed me, for sure. I will always see UPMC Williamsport in a new way. I appreciate little things more, like taking a walk with Morgan and Scooby. I’m more grateful for my job and the people I work with. I’m just thankful for everything.”

Footnote: Impella® is a registered trademark of Abiomed.