“All my older brothers were into the sport, so I started when I was just 4,” says Chris, a 50-year-old lawyer from Williamsport.

A standout on his high school soccer team, Chris started every game and went on to play Division I college soccer at Bucknell University. A stretched ligament in his left knee between his freshman and sophomore years in high school didn’t hold him back.

“I played throughout high school and into college wearing a knee brace for stability,” he recalls.

But then Chris tore both the anterior cruciate ligament (ACL) and medial collateral ligament (MCL) in his right knee just before his sophomore year at Bucknell. The injury meant his soccer-playing days were over. He ended up having multiple surgeries to repair both knees. 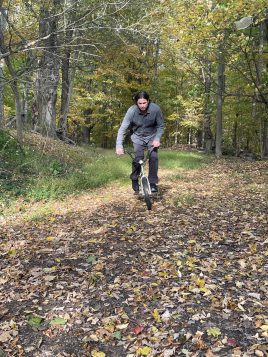 Living in Pennsylvania’s scenic Pocono Mountains, the athletic Lovecchio family enjoyed snow skiing in the winter. Though Chris excelled on the soccer pitch, his greatest love was snow skiing. But as he grew older, the sports injuries of his youth came back to haunt him.

Over the years, Chris stopped engaging in many of his favorite activities — coaching soccer in the community and skiing, hiking, and biking with his family.

“The bone-on-bone pain I was experiencing would drop me to the ground,” says Chris, a husband and father of three. “You just don’t realize how it affects you, your family, and everyone around you.”

After a while, injections and other treatments could no longer relieve the pain. So, Chris turned to John Bailey, MD, an orthopaedic surgeon at UPMC Williamsport, for help. In October 2021, Chris became one of the first people to undergo outpatient joint replacement surgery to replace his right knee at UPMC Williamsport.

A New Approach to Knee Replacement

The benefits of this innovative procedure include a lower risk of infection, a faster return to normal activities, and a more comfortable recovery at home.

The best candidates follow a healthy lifestyle, have no significant medical conditions, are highly motivated, and have a good support team at home.

For his part, Chris says he “liked Dr. Bailey immediately.”

“He answered my questions and responded to my concerns with confidence,” Chris says. “He was straightforward and very reassuring. And it was great to have the surgery done close to home in Williamsport.”

A few weeks before the procedure, Chris and his wife, Bradi, attended a class to learn what to expect on the day of surgery and how to navigate safely at home.

“Dr. Bailey said it was a badly damaged knee — but nothing that couldn’t be repaired with a replacement,” Chris says.

Within hours, he was up and walking with a walker — and even practiced going up and down a few stairs. He needed only mild oral pain medicines for discomfort. By 7 p.m., Chris and Bradi were on their way home.

“The surgery got rid of the significant source of my pain, so I was more than ready to get moving,” Chris says.

Chris is also grateful to his physical therapy team in Williamsport.

“They did a great job helping me get my range of motion back,” he says.

After just five weeks, he was released from outpatient rehab and continued doing physical therapy on his own at home.

Returning to a Busy, Active Life

Chris’ outcomes were so positive that six months after his surgery, in April 2022, Dr. Bailey performed another same-day surgery to replace his left knee.

He’s getting back to walking, hiking, and bike riding with his family. And he’s especially eager to get back on the slopes.

“I can’t wait to go snow skiing,” he says. “I won’t be able to ski the way I used to, but I’m really looking forward to just getting out there and not being in pain.”