But after signing up for a 14-mile trail race in north central Pennsylvania, Gordie went through the necessary training. Then, with just days to go until the race, his foot problems popped up again.

A phone call to his primary care physician allowed Gordie to get an appointment with Stephanie Florence, DPM, foot and ankle surgeon, UPMC Wellsboro. There, he received the treatment he needed to reach the finish line.

“I’m truly grateful to Dr. Florence’s staff for making her so readily available against all odds,” says Gordie, a graphic designer at Garrison Hughes, Inc.*

Gordie joined his high school’s cross country team as a junior in 1981 and competed for the next two years.

He improved at a steady pace, beating his previous best time with each passing competition. He would write a time goal on his wrist before each race and surpass it.

“I was setting goals, meeting them, and loving the fact that I was hitting these benchmarks of times that I wanted to beat,” he says.

Then, in one of the final races of his high school career, it happened.

Gordie set a new personal-best time, but it came at a cost. He suffered a foot injury during the race that left him in serious pain.

He didn’t know it until years later, but he had suffered a stress fracture in the metatarsals of his left foot.

“I could hardly walk,” he says. “It felt like my foot was splitting in two.”

Although the pain subsided in time to let Gordie run one final race in high school, he wasn’t able to train for it. As a result, he posted a disappointing time.

“I was really, really discouraged,” he says. “I’m not a sports guy, and here was something I found, a sport I could really do, and this really put a damper on it.”

Over the next 40 years, Gordie tried to return to the sport of running several times. He would buy new shoes and start a running routine.

But time after time, new injuries would pop up: foot, ankle, knee, lower back, and so on. Those injuries ended his running comebacks almost as quickly as they began.

After it happened yet again in 2018, he thought his running days were over.

“It was like a concrete wall, to the point where I just completely gave up on ever running again,” he says.

How a Mistake Led to a Comeback 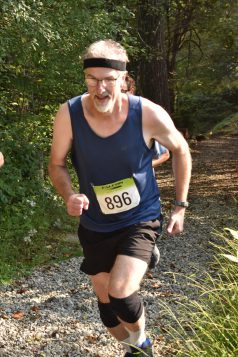 In May 2022, a former co-worker encouraged him to register for the Hyner View Trail Challenge. The event, scheduled for April 2023, is a forest trail run/hike with climbs and descents. Although the event is difficult, participants can go at their own pace.

As an avid hiker, he decided to sign up. But when he went to the challenge’s website, he accidentally signed up for a different event: the Hyner Half Plus — a 14-mile trail race that was scheduled for Aug. 27, 2022.

Unlike the Hyner View Trail Challenge, the Hyner Half Plus has a time limit. And because it was scheduled for late August, Gordie only had a few months to train instead of a full year.

“My stomach did one of those flips as I realized what I was up against,” he says. “I probably could have just called them and explained, ‘I screwed up,’ but there was something about it that made me want to actually go ahead and do this.”

After experiencing no problems, he decided to see if he could increase his pace. So he developed a form that he calls “old man running.”

“It’s basically just super-slow jogging,” he says. “My kids were super embarrassed by me doing this, but I didn’t care.”

Over the next couple of months, he continued to improve and was able to start running faster and faster.

“It went better than I ever would have imagined,” he says.

A Setback During the Comeback

In early August, it happened again. Gordie was in the middle of a 4-mile run when he took a step and felt a sharp pain in his left foot.

“I was taking a downstep onto an area of grass, and then, bang!” he says. “A sudden, sharp pain in the ball of my left foot. All I could think was, ‘Oh, no — stress fractures.'”

He finished the run, but he felt the pain several more times. Nervous about whether he’d be able to compete in the Hyner Half Plus, he called his UPMC Wellsboro primary care physician, Judy Tubbs, CRNP. She connected him with Dr. Florence’s office, who scheduled him for an appointment.

Dr. Florence diagnosed Gordie with metatarsalgia, pain and inflammation in the ball of his foot. It’s a common injury from high-impact sports like running. She gave him a mild steroid shot and some stretches to help him lower the impact on his foot.

A couple of weeks later, he was ready to run in the race.

A Grueling Race to the Finish Line

The Hyner Half Plus is a difficult race with steep elevations. Gordie didn’t run the entire time — the steepness of the mountains made that too difficult for most competitors — but he kept moving.

“It was very much step by step, one foot in front of the other,” he says. “I wasn’t worrying about the next mile, I was thinking about where my next step was landing.”

“I guess part of it was just remembering how much I wanted to do this and how much it meant to me personally to be able to run again,” he says. “That kind of kept me going through this extremely difficult race.

“It was absolutely grueling. It was the hardest physical challenge that I’ve ever accomplished.”

Finishing the race left Gordie with a tremendous sense of accomplishment and filled him with confidence. It led him to complete another race, a 10K in September.

Without the treatment from Dr. Florence, Gordie believes he would not have been able to run the Hyner Half Plus and continue on his running journey.

“Her office workers are miracle workers to be able to get me in there. Nothing would have happened without them,” he says. “Dr. Florence is an incredibly knowledgeable and personable expert in foot and ankle care, and we are so lucky to have her in Wellsboro. To have a specialist like that locally is amazing.”

Gordie has no plans to stop running anytime soon. In fact, he’s already signed up for another difficult race.

“I refuse to quit running until my body, or nature, or something else tells me that it’s absolutely time to stop,” he says. “My intention is to keep on going as long as I possibly can.

*Garrison Hughes, Inc. is a contracted design firm of UPMC.