Janet Collins loves the outdoors. Her greatest joys are riding horses and zipping around her 20-acre Mercer County farm on her utility terrain vehicle (UTV). But complications from diabetes and hypertension led to the development of peripheral artery disease (PAD) — a circulatory problem that narrows the arteries and reduces blood flow. That led to the amputation of Janet’s lower left leg in 2019.

Three years later, Janet was in danger of losing her right leg when she met the limb salvage team at UPMC Passavant, part of the UPMC Heart and Vascular Institute. 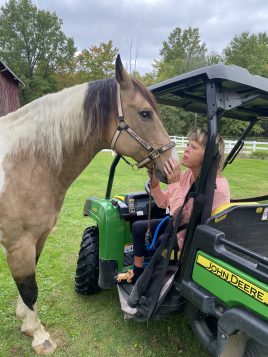 Diagnosed with diabetes in 1975, Janet struggled with lifelong complications, including poor circulation and nonhealing wounds. In 2019, she received a diagnosis of peripheral artery disease (PAD) in her legs and feet.

“A simple blister on my toe wreaked havoc,” she says. Despite several surgeries to improve blood flow, Janet developed gangrene (dead tissue), lost her toes, and eventually her left leg via an above-the-knee amputation.

PAD (a form of peripheral vascular disease) is the narrowing or blockage of the vessels that carry blood from the heart to your limbs. The most common cause is a buildup of plaque in the arteries that restricts blood flow. PAD commonly happens in the legs because they’re farthest from the heart and those blood vessels are smaller.

In 2022, when she saw Georges Al-Khoury, MD, chief of Vascular Surgery at UPMC Passavant, Janet had developed nonhealing sores on her right foot — a gangrenous toe and a large, gaping abscess on her ankle. She had seen multiple doctors, been to various hospitals, and had numerous procedures.

“The pain was terrible. And I was so afraid of losing my other leg,” says Janet, 65.

“I told Dr. Al-Khoury I had to get back on my horse. That’s my passion,” she says. “I needed this leg. It meant I could maintain my independence, be active, and be outdoors. It meant I could balance on a horse, transfer to my UTV, and ride around our property.”

“We worked very hard as a team to heal her leg,” says Dr. Al-Khoury, who sees patients at locations in the northern suburbs of Pittsburgh, including McCandless, Sewickley, and New Castle. “Because of the complex nature of vascular disease and how sick patients like Janet are, you need multiple specialists working together to save limbs and lives. We rely on each other to develop a plan and achieve the best outcome.”

That multidisciplinary approach was comforting to Janet. “It wasn’t just one doctor looking at me, it was a team. That’s reassuring when you’ve got a team of specialists taking care of you, evaluating the situation, and deciding the best route to go,” she says.

Janet’s surgery took place at UPMC Passavant–McCandless in a hybrid operating room (OR) dedicated for vascular procedures. The hybrid OR, with its advanced medical imaging equipment, can support both open surgeries and less invasive image-guided endovascular procedures. If necessary, it allows specialists — often from several disciplines — to perform multiple procedures without having to move the patient.

Before coming to UPMC Passavant, Janet had several procedures on her foot and leg, including a bypass graft that rerouted blood around a clogged artery. But that vessel was now completely blocked. Dr. Al-Khoury performed an angiogram procedure to unclog the graft. He also rechanneled her arteries using an angioplasty procedure to clean and improve the blood flow to her foot.

In the same OR, another team member from podiatry amputated her toe and removed dead tissue from the ankle wound to control the infection. Although three more toes eventually needed amputation, multiple procedures including a skin graft to close the wound on her ankle saved her foot, right leg, and big toe. The limb salvage team followed her closely throughout her hospital stay and after discharge.

Janet calls Dr. Al-Khoury “a genius.” Everything has healed nicely, and she’s getting fitted for a special shoe. She hopes to ride her two horses again soon — a big goal of hers.

“It’s a miracle I still have my leg, ankle, heel, and a healthy big toe,” she adds. “That team is a godsend. I don’t have to travel across the country to find the best doctors. I just have to go to UPMC Passavant.”

To schedule an endovascular and vascular therapy appointment at UPMC Passavant, call 412-748-6484.