Jan Bloss was nervous on the day of her hip replacement surgery in June of 2021. She had put it off as long as she could. But the pain had grown intolerable, to the point where she could barely stand. 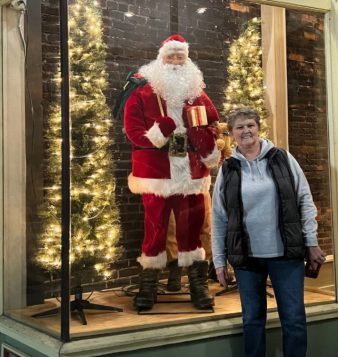 Several things helped her that day. First, she knew her surgeon, Terrance Foust, DO, because he had done surgery on her knee. Second, she was close to home: UPMC Cole is 30 minutes from her home in Port Allegany.

But there was something else. Jan knew the people at UPMC Cole. They were her friends and neighbors. Some were even students her husband, Denny, had once coached.

“It was a hometown feel,” says Jan, 67. A mother of two, grandmother of four, and great-grandmother of three, she’s lived her whole life here. That sense of comfort and being close to home made a huge difference.

Still, Jan was apprehensive. She told Denny, who was with her the morning of surgery, that she feared the pain. “I thought, this is going to hurt so bad,” she says.

But, besides a slightly sore incision, Jan had no pain after the surgery. “It was incredible,” she says. “They had me up and walking later that day, with no pain.”

Jan is now back to work driving a school bus part-time. She can also pick up and play with her great-grandchildren again. Weeks will pass, and she won’t even think about her hip replacement.

But getting to that day — to that choice — was a long and winding path for Jan, which is common for people getting joint replacements.

This is because having joint replacement surgery is a big decision. People know that it will take time to heal and rehabilitate. But ultimately, as Jan discovered, it’s life-changing on the other side.

“If I hadn’t waited, I would have been pain-free a lot sooner,” she says.

Jan always thought her hip pain must be due to her back pain, which she’s had most of her life.

She worked in a factory, standing on a hard concrete floor, for several decades, which was hard on her back. She also had spondylolisthesis (vertebrae out of place) and ankylosing spondylitis (inflammation in the spine). Doctors found fractures in four of the bones in her lower back.

When she could no longer endure the back pain, she went to UPMC in Pittsburgh for back surgery. “I have screws holding everything in place,” she says.

While that surgery helped her back pain, the pain in her right hip only worsened. “I couldn’t play with my grandkids or shop with my daughter,” she says. Everything about her life was on hold because moving hurt.

She tried a brace for her hip, which helped a bit, but not enough. She was also on a high dose of pain medicine to function. She didn’t like being dependent on the pain meds.

Getting Ready for Joint Replacement Surgery

Although Jan liked the surgeon she saw in Pittsburgh, it was four hours away from Jan’s home, so she had to stay with her daughter after her last surgery. She wanted a more convenient option.

Fortunately, she had seen Dr. Foust at Coudersport. “I trusted him and I knew he was good. So I thought, I’d just stay here in town.”

She had so many questions and Dr. Foust and his team did their best to put her mind at ease. They explained what would happen and went over the recovery protocol.

After her joint replacement surgery, Jan went home after only one night in the hospital. She used a walker for the first few days but only needed a cane afterward. After about two weeks, she was able to ditch the cane.

By the time she went back for her six-week checkup, she was walking on her own.

Jan set herself up for success by following her doctor’s rehabilitation plan. “I did everything I was supposed to do,” she says. That included going to physical therapy twice a week for six weeks.

Physical therapy was challenging, Jan says. “I had to learn how to use muscles again,” she says. That meant moving her leg in ways she hadn’t in a long time.

It helped that Jeremy, her physical therapist, had wrestled for Denny when Denny coached. “I’ve known him all my life,” she says. “That’s what it’s like when you come from a small town.”

The familiarity and friendliness of everyone made the whole experience more manageable, even during the hard times. And now, all of the effort has paid off.

“I can mostly do what I want to do,” she says. That includes gardening, riding a side-by-side ATV with her husband, and being active. “I can out-shop my daughter now,” Jan jokes.

Jan has no regrets about her decision to get a hip replacement at UPMC Cole. “They are family-oriented, they understand you, and they do their best to help,” she says.

The only thing she would change is making the decision earlier. “If I had it to do over again,” she says, “I would have had it done years ago.”