After colliding with a snowboarder on a Colorado ski slope, Patrice Matamoros was left with a fractured sacrum that wouldn’t heal. She finally found relief when she turned to the same UPMC physiatrist who had successfully treated her daughter’s nagging elbow injury — and later, her son’s excruciating Achilles heel pain.

After having hip replacement surgery in 2018, Patrice Matamoros spent months working with a trainer so she could return to skiing. But the following winter in Vail, Colorado, the 50-year-old collided with an out-of-control snowboarder, fracturing her sacrum.

Back in Pittsburgh, she saw a trauma surgeon who referred her to UPMC for physical therapy at the UPMC Rooney Sports Complex on Pittsburgh’s South Side. She also began working with Ron DeAngelo, MEd, director of sports performance training, to strengthen her core and back.

“It had been three months since my accident, and I was still in a lot of pain. I had trouble walking and doing daily tasks. It was painful just bending over or lying down,” says Patrice.

At a follow-up visit with her trauma surgeon, x-rays showed routine healing despite ongoing pain. That’s when she and Ron decided it was time for her to see Kentaro Onishi, DO, a sports medicine physician at the UPMC Department of Physical Medicine and Rehabilitation and Department of Orthopaedic Surgery.

During her years as CEO of the Pittsburgh Three Rivers Marathon (P3R), Patrice became familiar with some of the area’s leading specialists in orthopaedics and rehabilitation, including Dr. Onishi and other experts from UPMC Sports Medicine. UPMC, a P3R sponsor, also sponsors Junior Achievement of Western Pennsylvania where Patrice now serves as president.

When Patrice learned her injury wasn’t healing, she thought of Dr. Onishi, who had treated her teenage daughter for an elbow injury earlier that year. Patrice saw Dr. Onishi in summer 2019 at the UPMC Rooney Sports Complex. Using diagnostic ultrasound, he determined that the injury was due to a sprained ligament near the fracture, and the sprained ligament and unstable joint were causing her symptoms. He then administered a dextrose injection — a solution of saline, the simple sugar dextrose, and lidocaine — into the sprained ligament under the precise guidance of ultrasound.

“One injection and I was relieved of pain,” says Patrice. “I literally never looked back. I went to the trauma doctor about a month later and everything was healed.” 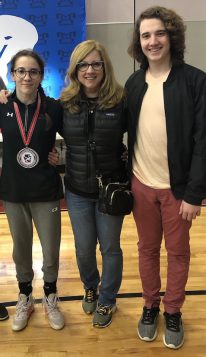 Patrice’s daughter, Jordana, had dislocated an elbow during a martial arts competition as a young teen. Complications resulted in multiple surgeries over the years to straighten her arm and release the ulnar nerve, one of the three main nerves in the arm, which had moved out of place. Despite her discomfort, she continued to compete — even as a member of the Fox Chapel Area High School wrestling team.

“But Jordana’s arm still wasn’t right. It lacked a full range of motion, and it kept falling asleep,” says Patrice. “I mentioned it to Dr. Onishi, who said to bring her in.”

Dr. Onishi assessed her limited range of motion under real-time ultrasound and administered an ultrasound-guided PRP (platelet-rich plasma) injection, which is an injection of concentrated platelets from Jordana herself. This resulted in an improved elbow range. At the follow-up visit, Dr. Onishi was also able to release the scar from a nerve in the elbow using a procedure called hydro-dissection, a simple injection of normal saline injected under ultrasound guidance to help remove the scar for an injured nerve to regain its normal function. Hours later, the family was celebrating. “The before and after were amazing. It was working. She felt instant improvement in the way it felt and the coloration of her arm,” says Patrice.

Jordana went on to become a professional mixed martial arts (MMA) fighter, winning her debut fight in 2020 less than a year after the injection. “Dr. Onishi made this possible,” she said after her victory. Now 21, she currently is recovering from another injury and not competing. But Jordana is now training for her return as a professional MMA fighter at one of the top gyms in the world and is able to wrestle and box at full speed with full contact.

For Garrett, CRPS started with excruciating pain in his Achilles tendon that radiated up his leg. Over the years, he saw countless specialists, but the condition persisted. He was bedridden for months when the pain moved into his back. He spent time at the Children’s Institute of Pittsburgh in intensive physical therapy.

“He eventually was able to deal with the pain, but it was terribly limiting,” says Patrice. “He couldn’t run, jump, or hop. His only enjoyment was playing video games.”

In 2021, Garrett, age 20, admitted to Patrice that the pain had made a fierce comeback. “It hurts all the time. It hurts to stand, it hurts to sit, it hurts to sleep,” he told her.

Patrice pleaded with him to try one more doctor. “Dr. Onishi helped Jordana and he helped me. Can you just give him a try?” she asked.

Dr. Onishi used ultrasound to examine Garrett. “Within 15 minutes, he had pinpointed the problem: tendinosis was causing this unbearable pain,” says Patrice.

“I can fix this now,” Dr. Onishi told them. He then suggested Achilles tendon scraping, a Swedish technique that used to require an operating room but is now an outpatient procedure thanks to the ultrasound available in his clinic.

The next day, Garrett got up and ran for the first time in eight years — a mile and a half. Now 21 and pain free, Garrett has left his sedentary days behind. He’s now a certified whitewater rafting instructor and guide and recently worked as a production assistant on a Netflix show.

“Without Dr. Onishi, my son would still be suffering,” says Patrice. “Instead, Garrett is totally exploring life now.”

A Grateful Mother and Patient

Patrice credits Dr. Onishi’s approach for the success he’s had in treating her family.

“Dr. Onishi looks at the whole person and the whole body — not just the point of the injury,” she explains. “He is super tuned in to his patients. He asks questions, probes, and listens. He can home in on an area and see things other people aren’t able to see.”

“I feel thankful and grateful as a patient and as a mother,” she adds. “Dr. Onishi changes lives and Pittsburgh is very lucky to have him.”

Results are not typical of all patients. Many of the treatment options discussed in this patient story are not typically covered by insurance. Consult your insurance plan regarding your coverage.

At UPMC, we strive to improve your function after injury or illness. We help people recover from functional, pain-related, and neurological conditions, with both inpatient and outpatient care available. We are dedicated to providing you with exceptional clinical care and focused on developing new technologies and treatments to help you achieve mobility and maintain independence. Find a provider near you.