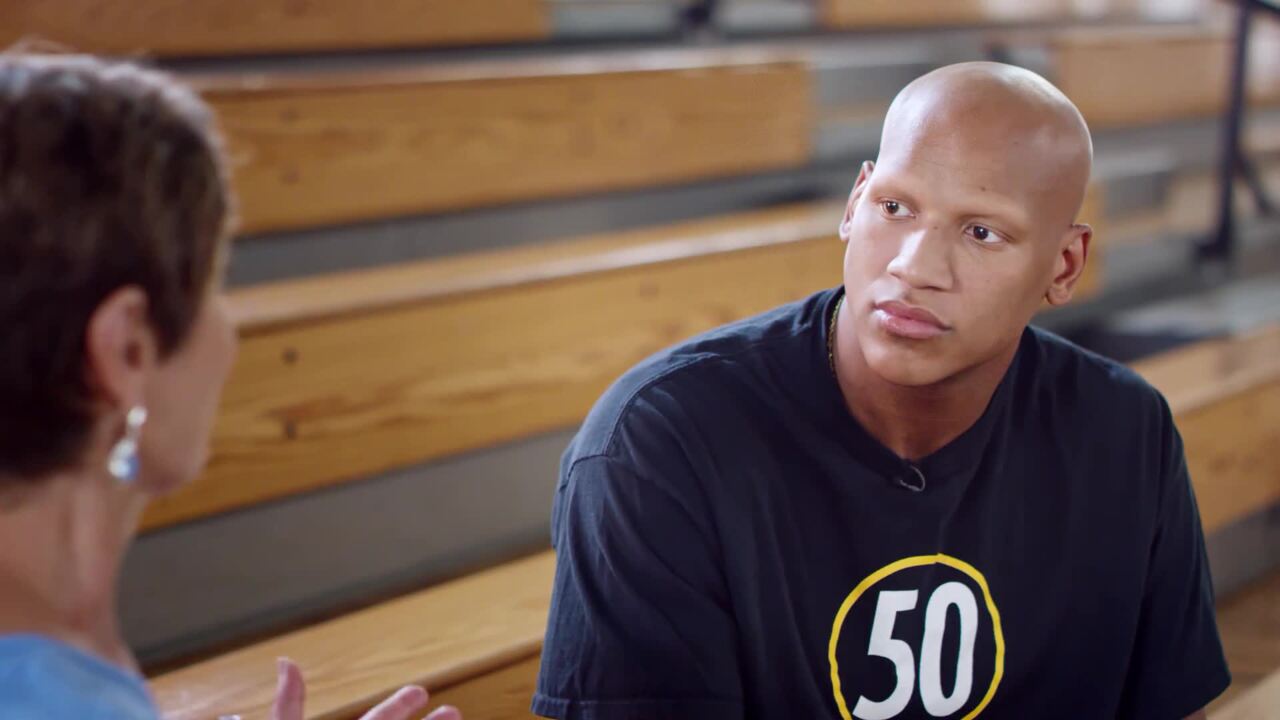 Hear the Whole Story from Ryan Shazier. Listen to the 50 Phenoms Podcast for More.

Paula Franetti needed to grab the steering wheel as she recovered from a severe car accident.

Except this one didn’t guide a car. It controlled her life.

The image came upon Franetti as she lay in her bed in the intensive care unit at UPMC Mercy in September 2016, just days after a car crash sent her car – and her life – into a spin. She realized that to regain control and start getting on the road to recovery, she needed to take the wheel.

“I think it was right after I realized how many injuries I was dealing with,” Franetti says now, nearly three years after the crash. “I started thinking, how am I going to live my life, what am I gonna do? I got to a point where I really started worrying, and it got darker and darker and darker.

“But then there was a point where I realized I have the best medical care that’s going to put my body back together, but my life, the life that I want to live, is something they can’t do for me. I think I had that moment where I realized I’m the only one that can get me well, and being well to me meant being able to be as active as I was before the accident. So I decided right then and there, it’s like, I’m going to get well.”

The 63-year-old Regent Park resident continues to steer her own life, and she’s come a long way in three years.

Viewing NowEpisode 1 From Trauma to Triumph

Episode 2 From Injury to Inspiration

Episode 8 From Cancer Treatments to Triathlons

‘I Literally Thought I Was Dead’

Franetti was driving her normal route to her Uptown Pittsburgh office on the morning of September 13, 2016. Traveling on Jumonville Street, she had a green light as she approached the intersection with Forbes Avenue.

But as Franetti navigated her Honda CRV through the intersection, a car traveling at a high rate of speed on Forbes Avenue ran the red light. The vehicle collided directly with Franetti’s driver door, “blindsiding” her – she never saw it coming.

Franetti’s car spun across Forbes Avenue and struck a rowhouse before coming to a rest on Jumonville. She had extensive injuries, but she didn’t know that at that moment.

Instead, she had a vision of herself, sitting on her car seat – gripping the steering wheel.

“I literally thought I was dead, I had died, because I had no pain,” she says. “I was in a really peaceful place, and nothing around me made any sense. Like, my car wasn’t even there.”

Bystanders, including a nurse who lived nearby, helped pull Franetti from her wrecked Honda. An ambulance transported her to the trauma center at UPMC Mercy, just blocks away. Within the all-important first hour after the accident, Franetti was getting treatment for her injuries.

‘Sometimes I Just Relive It’

“On that first day, it was really about trying to save her life because she was bleeding to death,” says Gele B. Moloney, MD, an orthopaedic trauma surgeon who was part of Franetti’s care team. “She had severe injuries in her chest and pelvis, among other things. Certainly I never meet anyone on their finest day, but she was in a pretty rough spot.”

Three surgical procedures followed in the days after the crash. Trauma attending surgeon Garth Elias, MD, repaired her diaphragm the first day. Dr. Moloney and urologist Ronald Benoit, MD, operated on her pelvis and bladder, respectively, the next day.

After nearly two weeks at UPMC Mercy and two-plus weeks at UPMC’s Seneca Place skilled nursing facility, Franetti returned home – a month after she left it. Confined to a wheelchair, Franetti remained on the first floor of her house.

With a cousin from Italy living with her, plus more family and friends, Franetti had all the help she needed. But that proved difficult at times for someone who was so active and independent before the injuries.

“Losing all of my independence, and really having to rely on other people, I would typically be the person taking care of other people,” she says. “Just knowing that I couldn’t do the simplest thing and that I had to let other people help me or otherwise it was going to hurt me in the long run … I would get depressed and I would get frustrated because I had to keep asking.

“I hated the fact that I had to keep asking for help. You go back and forth between being angry that you’re in this situation and angry that you have to do this, and then it’s feeling bad because you’re taking it out on people who are taking care of you.”

Franetti spent 57 days without standing. After nearly two months, her doctor told her she could leave the wheelchair behind – and not only that, Franetti was instructed to take some steps around a hospital room using a walker.

With her cousin filming on a phone, Franetti took some of the biggest steps of her recovery – moving a rather unsteady 20 feet.

“Being able to regain verticalness was just astounding to me,” she says. “I remember that moment. Sometimes I just relive it, just looking down and seeing how tall you are from being vertical.”

Living and WellnessRyan Shazier’s 50 Phenoms: Inside a Traumatic Injury

Family HealthTrauma and PTSD: Living in the Aftermath of a Traumatic Event

Mental HealthPhases of Trauma Recovery: How to Reclaim Normalcy After a Crisis

Health Topics A-ZMeet the Members of a Trauma Care Team

Living and WellnessRyan Shazier’s 50 Phenoms: Inside a Traumatic Injury

Family HealthTrauma and PTSD: Living in the Aftermath of a Traumatic Event

Mental HealthPhases of Trauma Recovery: How to Reclaim Normalcy After a Crisis

Health Topics A-ZMeet the Members of a Trauma Care Team

A doctor’s visit revealed yet another injury: knee ligament and cartilage tears, bone bruises, and microfractures in her left leg.

The setback was crushing at first for Franetti, but she didn’t give up – a crucial factor in her recovery.

“She really took ownership of her injuries from the very beginning,” Dr. Moloney says. “She had high expectations for her recovery, and rather than focusing on setbacks she was always looking forward and pushing toward her goals.”

Continued rehab, taking everything slowly, helped Franetti overcome her knee injury. But another setback cropped up shortly after she was cleared to drive in January 2017. A short trip to the grocery store became a scary experience for Franetti, who hadn’t driven since the accident.

“I really didn’t expect it to be this traumatizing because I thought, I know how to drive,” she says. “I thought this is going to be a little scary. … People were beeping their horn, and trying to pass me, and there’s the little manholes you’re hitting – all this stuff, and it’s just overwhelming.”

On the advice of Dr. Mramor, Franetti returned to the scene of her crash on the one-year anniversary. She re-enacted the situation to the minute: stopping at the red light, waiting for it to turn green, then going through the intersection.

This time she made it safely, later visiting Dr. Mramor to discuss her success.

“I just knew that I’ve got to conquer this fear,” she says. “I’m not going to let that intersection hold me back. I didn’t want to live that way.”

A fourth surgical procedure, in December 2017, fixed an issue that cropped up in her diaphragm. Now, three years post-crash, Franetti lives the active life she had before that fateful morning. She runs 5Ks. She competes in the National Senior Games, and her basketball team placed fourth at the Games in June 2019 in Albuquerque, N.M.

Franetti, who earlier worked in orthotics and prosthetics and later cardiac rehab and exercise physiology, also created a new business in August 2018. She aims to help people who are recovering from their own life-changing health issues by using the power of positivity.

“If you let (negative thoughts) fester, they can take you to a really, really low place and make you think, ‘What’s going to happen to me?’ or make you afraid,” says Franetti, who also is a public speaker and wrote a book about her experiences. “But somehow, you find that inner spirit, that inner motivation to say, ‘No, I am going to start all over again and I’m gonna make it.’”

Headquartered in Pittsburgh, UPMC is a world-renowned health care provider and insurer. We operate 40 hospitals and 700 doctors’ offices and outpatient centers, with locations in central and western Pennsylvania, Maryland, New York, and internationally. We employ 4,900 physicians, and we are leaders in clinical care, groundbreaking research, and treatment breakthroughs. U.S. News & World Report consistently ranks UPMC Presbyterian Shadyside as one of the nation’s best hospitals in many specialties and ranks UPMC Children’s Hospital of Pittsburgh on its Honor Roll of America’s Best Children’s Hospitals.