“The ATs and docs know how to treat athletes — especially making sure they’re feeling okay and getting back to their sport on time.” –Payton

A multisport athlete at Central Catholic High School, Payton was enjoying a strong freshman year on the football team. All season long, the Vikings were defeating opponents by significant margins, earning them a spot in the Western Pennsylvania Interscholastic Athletic League (WPIAL) Class 6A championships in November.

But an unexpected injury brought Payton’s season to an abrupt end. It was early in the championship game when he got called in to play quarterback. They were to run a wildcat formation. “I felt ready, I called the play, I knew what was coming, and then I just ran to my right, got balled up pretty good, and I heard a crack,” Payton recalls. While he didn’t feel much immediate pain, the appearance of his right ankle told him something wasn’t right.

Fortunately, a longstanding partnership between UPMC Sports Medicine and Central Catholic High School meant that team doctor Albert Lin, MD, and athletic trainer Regis Visconti, MS, LAT, ATC, were standing at the ready. “Regis is always there. Our teams have really close relationships with him, and he’s always making sure everyone is okay,” Payton says. Both rushed onto the field from the sidelines, along with Dr. Lin’s resident Jorge Rocha, MD, to evaluate Payton’s injury.

From the Sidelines to the Field

“Regis was the first one out on the field just telling me to calm down, that everything would be okay, and to just hang in there. That meant a lot; I really needed that,” Payton says. Drs. Lin and Rocha acted quickly to stabilize the ankle on the field so Payton could safely be placed on a stretcher and in the ambulance.

His mom kept him updated on the score of the game during the ride to UPMC Children’s Hospital of Pittsburgh. Payton recalls receiving more texts of well wishes than he’s ever received. “I knew we’d come back. The team, our fan section, and my family always have my back. They’re just awesome, and I wouldn’t have wanted to go through this with anyone else,” he says. And he wasn’t wrong. The Vikings — the defending WPIAL 6A champions — defeated the North Allegheny Tigers 38 to 24 that night. 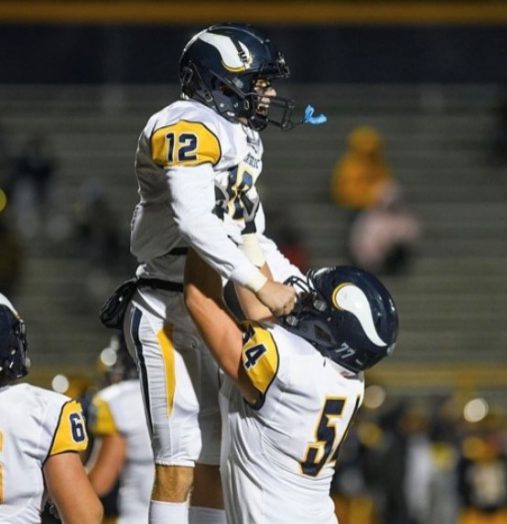 At UPMC Children’s, Payton was seen right away. While surgery would be necessary, the orthopaedic team decided that first the swelling needed to go down. They splinted his ankle and sent him home to await the procedure. Meanwhile, Regis and Dr. Lin put their heads together to determine a referral for him. Payton says, “I remember them saying that Dr. Hogan was one of the best foot and ankle surgeons for athletes, so we went for it.”

Within four days of the injury, Payton was back at UPMC to see orthopaedic surgeon MaCalus Hogan, MD, MBA. The evaluation showed he had broken two bones in his right leg near the ankle — a significant fracture in the fibula and a smaller fracture in the tibia. The next day during an approximately hour-long surgery, Dr. Hogan inserted a plate and seven screws into his fibula, a screw into his tibia, and used a suspensory fixation system to help pull the bones back together to promote healing.

During a follow-up visit two weeks later, Dr. Hogan removed the surgical wrap so the ankle could be put into a cast. A trouper the entire time, Payton describes his surgery and recovery as “pretty straightforward and simple” and “not very painful.” In mid-December, the cast came off, a boot went on, and Payton began physical therapy (PT) with UPMC Centers for Rehab Services physical therapists at the UPMC Freddie Fu Sports Medicine Center.

“I worked with my therapist on exercises to help regain range of motion in my ankle and had sports massages to strengthen my calf,” he says. By January 2021, Payton was walking with the boot about 50% of the time and using crutches for support the other half.

Payton’s season wasn’t the only one to end after the WPIAL championship game. Although a Viking victory earned them a trip to the state playoffs, upticks in the coronavirus prevented the Vikings from playing in their first-round game — and brought their successful 2020 season to an unexpected end. Payton is now looking forward to the 2021 football season. He was cleared to run in March and plans to be ready for football training camp when summer comes around.

“I think the connections with UPMC helped a lot because they could get me through faster and make sure it’s all going at the right pace for success,” Payton says. “The ATs and docs know how to treat athletes — especially making sure they’re feeling okay and getting back to their sport on time.”

While not all patient experiences are alike, Payton’s represents a total team effort and collaboration between health care providers, which is the goal for UPMC Sports Medicine.

OrthopaedicsRecovering from Hand and Wrist Injuries

ConcussionAmelia’s Story: Traveling from Australia to Pittsburgh for Concussion Treatment

OrthopaedicsRecovering from Hand and Wrist Injuries

ConcussionAmelia’s Story: Traveling from Australia to Pittsburgh for Concussion Treatment