For nearly a decade, Richard Jones successfully managed his hypertension, diabetes, and chronic kidney disease through careful diet, exercise, and medicine. But in late 2019, blood tests showed the 77-year-old had quickly advanced from stage 3 to stage 5 kidney disease.

“At first, I really didn’t feel any symptoms,” says Richard, who lives in Beavertown with his wife Marcia. “But then, I started getting very tired and needed to nap a lot. As my kidneys got worse, I also became very itchy.”

Family history made Richard think twice about starting dialysis. Richard’s mother was 87 when she went on dialysis for several years. Knowing how it had affected her quality of life, he decided to explore a transplant. “I have great faith in God, so I put things totally in the Lord’s hands,” Richard says. 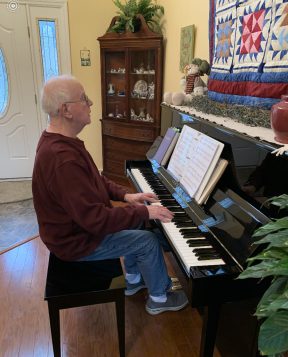 According to the United Network for Organ Sharing (UNOS), most people spend an average of more than five years on the kidney transplant waitlist before getting an organ. There are currently 98,000 people waiting for a kidney from someone who has died.

Richard’s name was added to the national transplant waitlist. But his daughter-in-law, Samantha Jones, had other plans. “I knew he could get his transplant faster if I could be a living donor,” she says.

“Samantha went ahead and got tested without me knowing,” says Richard. “It just seemed too much to expect of anyone.”

The New Jersey-based esthetician and cosmetology educator soon learned she was a solid match. “I knew he never wanted to ask, but I told him, ‘I’m totally doing this!'” she says.

Following initial consults locally at UPMC Williamsport, Dr. Stea was able to refer him to transplant surgeon Amit Tevar, MD, in Pittsburgh, director of the UPMC Kidney and Transplant Program, part of the Thomas E. Starzl Transplantation Institute. Since 1988, UPMC surgeons there have performed 6,000 kidney transplants and 1,600 living-donor kidney transplants, including complex cases. At UPMC Williamsport, patients can find pre- and post-operative care close to home with nephrologists locally able to prepare the patient for their transplant procedure, while providing testing following the procedure to monitor their kidney’s function.

“All UPMC transplant teams include a surgeon, social services, transplant coordinator, dietitians, and a transplant nephrologist,” says Dr. Stea. “Each member of the team evaluates the patient in person. A variety of tests also are conducted to be sure their overall health is good. All those tests can be done locally right here in north central Pennsylvania.”

Within weeks after being evaluated by Dr. Tevar and the transplant team, Richard and Samantha were scheduled for surgery at UPMC Montefiore in Pittsburgh on Friday, Aug. 13, 2021. Richard was released from the hospital the following Monday and stayed in Pittsburgh for daily check-ups before heading home on Wednesday.

“I can’t say enough good things about my and Samantha’s care, and the way our family was treated,” says Richard. “At every stage before, during, and in the months since surgery, UPMC has been incredible. The collaboration between Dr. Stea and Dr. Tevar was seamless, and it provided me the comfort of knowing I had a resource locally to monitor the health of my new kidney.”

“I truly wish people had a better understanding of the need for living donors. There are far too many people whose lives depend on getting a kidney,” says Dr. Stea. “The donation process is not as rigorous as it once was and donating an organ is quite safe.”

“I love my father-in-law, so at first, I really didn’t understand why everyone in the family thought my donation was such a big deal,” says Samantha. “My mother-in-law and my husband told me, ‘You didn’t just give him a kidney — you gave him a normal life back.'”

Richard says there is no way to describe how grateful he is to Samantha and how quickly they both recovered. “Samantha’s recovery was amazing. She bounced right back and really never lost her energy,” he says. “Five months after my transplant, I was out trimming hedges, cutting our two acres of grass, and tending to our garden.

“Sam didn’t just give me a kidney,” says Richard. “She gave me the opportunity to live a normal life.”

For more information on the full range of living donor and transplant services at UPMC — from pre-transplant evaluation to transplant surgery and follow-up care — call our toll-free number at 1-877-778-6110.