Utibe Essien, MD, MPH, is an assistant professor of medicine at the University of Pittsburgh School of Medicine. As a physician researcher, his work focuses on racial/ethnic health disparities in cardiovascular disease care and on social determinants of health such as food insecurity and housing instability. In 2020, he co-authored a study with Yale researchers that attracted national attention to racial and ethnic disparities in the reporting and prevalence of COVID-19 deaths. 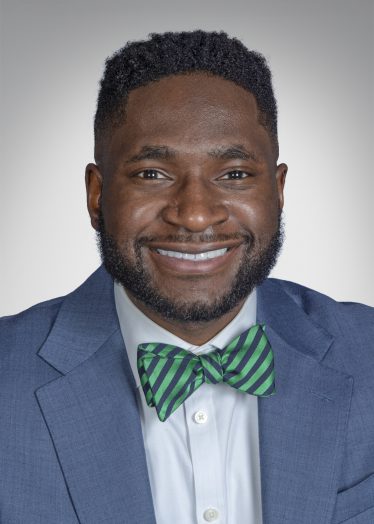 What Inspired You to Become a Doctor?

My story begins in Nigeria, where my parents were born. After my father completed medical school and residency in Nigeria, my mother, around seven months pregnant with me, decided to come to the United States to advance her education. Not long after arriving in New York, she visited her new obstetrician for a routine visit. She was told she had preeclampsia — very high blood pressure — and needed an emergency Cesarean section. My birth reflects many of the same health disparities Black mothers face today: they’re more likely to develop preeclampsia, have C-sections, and give birth to premature babies.

After obtaining his necessary travel paperwork, my father later joined us in New York and ultimately set up his own primary care practice, after years of U.S. medical licensing exams and retraining in Internal Medicine residency. The summer before I went to college, I worked with him there and saw the incredible bond he shared with patients. Even the kids he treated would bring their report cards to him, saying, “Look, Doc — see how good I did in school.” I realized that was the kind of personal impact I wanted to make in a community. He’s the main reason I’m in this profession.

When Did You First Become Aware of Health Disparities in Medicine?

When I was a medical student at Albert Einstein College of Medicine in the Bronx, it seemed like whatever the class topic — from genetics to kidney or heart disease — African Americans had higher health risks. But there was never any context behind the statistics. It was just accepted as, “it is what it is.” I started wondering: Why is this the case — and how can we fix it?

After medical school, I did a residency in internal medicine at Massachusetts General Hospital in Boston. My clinic in Chelsea served a largely Central American immigrant population. I quickly realized that the problems my patients faced outside the clinic were having a greater impact on their lives than whether I put them on the right blood thinner or cholesterol medicine. Did they have a job? Were they worried about being deported? Could they afford the medicines I prescribed?

I had no training in what we now call social determinants of health. I went on for a master’s in public health so I could better understand the root causes of my patients’ health issues.

Is Pittsburgh Seeing Any Specific Health Disparities That are Greater Than The Rest of The Country?

I personally haven’t done any research specific to Pittsburgh. But the city of Pittsburgh’s Gender Equity Commission report released last fall showed that Black women in Pittsburgh have some of the poorest health outcomes in the country — particularly those related to pregnancy and post-pregnancy. Black infant mortality also is unfortunately quite high in our community.

This subject is now part of the national conversation around health disparities. Maternal health boards are being formed to more deeply and thoughtfully understand why pregnant Black women — even those with a college education — are dying at five times the rate of pregnant white women.

It’s a statistic that relates to why and how racism can influence health. Increasingly, data suggests that racism, both physiological and psychological, influences access to care. We must begin to ask if there are differences in prenatal and postpartum visits based on one’s race.

What Drives Your Research Work in Health Disparities?

I look at health disparities as three distinct buckets: the patient, the provider, and the system. Each area needs to be better understood from both a clinical and social perspective.

Right now, I’m working to understand why patients with the most common heart rhythm disorder — atrial fibrillation — receive different care based on their race. Is it because of their clinical condition or their social condition?

How Was Your Research in Health Disparities Impacted by COVID-19?

I don’t think anyone in health care could foresee just how quickly and how impactfully COVID-19 would affect communities of color. But as data started trickling in, the disparities became clear. Black, Hispanic, and Native Americans are infected, hospitalized, and dying at higher rates from COVID-19 than the rest of the country.

I became involved this spring in a nationwide COVID-19 study with a team of researchers at Yale. We used publicly available data to look at three things: the racial differences in testing for COVID-19, the reporting of race and ethnicity data, and the actual mortality rates. Our initial data in April 2020 showed that Black patients were three and a half times more likely to die from COVID-19.

At that time, only 28 states were reporting race and ethnicity data. Nearly six weeks into the pandemic, we didn’t have any such data on 22 states. How does that lack of information impact the medical response and distribution of resources for those communities?

Another striking observation — something that relates specifically to our state — was the wide variation we saw in the completeness of data. Pennsylvania was missing 40% of data related to race and ethnicity in its reports. Ten years ago, the Affordable Care Act mandated the collection of race, ethnicity, and language data. But here we are, a decade later, still calling for clear and complete data in these areas.

I’ve always used social media to promote and share research data as it related to what’s going on in the world. But when the COVID-19 crisis hit, I felt it was important to highlight the racial disparities emerging in medicine. I began talking about why all of us — especially those of us in the health system — need to begin prioritizing health equity.

When George Floyd died, my social media presence took a new direction. I was a second year resident when Eric Gardner was killed minutes from where I grew up in New York City. Back then, I deeply felt the silence of no one talking about what happened — including myself. There weren’t open conversations like we’re having right now with virtual town halls supporting the Black Lives Matter movement and discussions about what it means to treat racism as a public health issue.

It’s been a game-changer to now talk openly about racism. I’m not unique in any way, but hopefully telling my story helps to put a face to the problem. If you can imagine what I feel hearing a siren behind me while out on a run, I hope that you can imagine how that feeling is shared by 40 million other people in our country who look like me.

How can medical training make a difference in addressing racial disparities and racism in medicine?

Racism is embedded in our nation’s history. We’ve come a long way, but we still have far to go. It’s important to recognize that racism isn’t just individualized. It’s not just the bad egg who called me a racist word. It’s the policies, procedures, and systems that are in place that actually perpetuate racist ideas and beliefs.

Health disparities are preventable and disproportionate health conditions that exist among all ages in a certain population. The first step to prevent health disparities is by learning about them. UPMC is committed to driving health education and programming, partnering with our community, and training health care providers to ensure all individuals and families have the opportunity to live healthier lifestyles.

UPMC is a world-renowned health care provider and insurer based in Pittsburgh, Pennsylvania. Learn about UPMC’s position on public health issues and gain a better understanding of the initiatives that advance the health care industry.